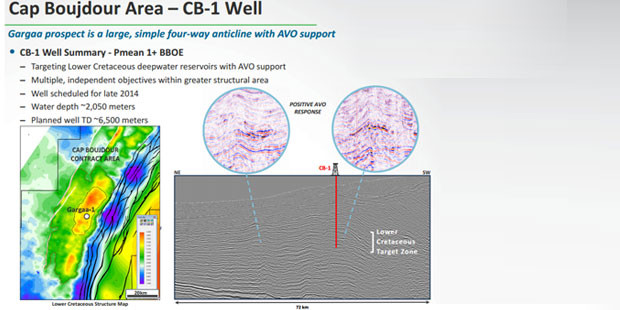 The Scottish operator Cairn Energy is drilling the first of its planned two wells, back to back, offshore Senegal.

It is also a 20% partner in an exploration well proposed to be drilled in Morocco’s  Cap Boujdour Contract Area in the fourth quarter of 2014, with Kosmos Energy (operator) and the Moroccan National Oil Company (ONHYM).

All of these are in rank wildcat territory. Neither Senegal, nor Morocco, has confirmed oil reserves. Morocco has been the site of active exploration drilling in 2014, with poor results. Cairn itself plugged and abandoned the two wells it drilled in the country between October 2013 and February 2014. One (FD-1) did not encounter clastic reservoirs in the target interval. The other, (JM-1), “confirmed the presence in the secondary objective of heavy oil over a gross interval of 110 metres”, Cairn claims. “Traces of light oil were found in the fractures in the Middle Jurassic primary objective”. The company declared, however, that “the ~200 metres of limestone penetrated had poor reservoir quality”.

Meanwhile, operations continue on FAN-1 in Senegal. The well is located on the North Fan Prospect in 1,427m water depth in the Sangomar Deep block, targeting multiple stacked deepwater fans.

“In light of required rig maintenance and to optimise the rig schedule, the top hole section has also been drilled on the second exploration well SNE-1, located on the Shelf Edge Prospect in 1,100m of water”, cCairn says in an operational update. “The rig has returned to FAN-1 to continue drilling the deeper sections. After drilling operations on FAN-1 are complete the rig will then return to the SNE-1 location”.

Cairn (Operator) has a 40% WI in the three blocks offshore Senegal (Sangomar Deep, Sangomar Offshore, Rufisque Offshore) and is working with JV partners: ConocoPhillips 35% WI; FAR Ltd 15% WI and Petrosen, the Senegal National Oil Company, retaining a 10% WI in the exploration phase. In the event of a commercial success, ConocoPhillips will have the option to operate the future development of the resource.

« Morocco: Another One Bites The Dust
Has Longreach Broken The Jinx? »