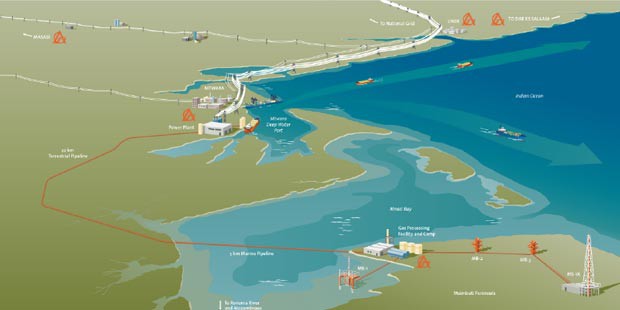 Altus Oilfield Services FPZ has become the first “customer” to pay for its site on Tanzania’s first formal Oil Field Supply Base.

The company handed in a $526,280.00 cheque in mid June, 2014 for its tenancy in a 10 hectare area, part of the Mtwara Freeport Zone (MFPZ) being developed by the Tanzania Export Processing Zones Authority (EPZA) in Southern Tanzania. That area is in itself, part a 110 hectare area that has been designated by the government for investment purposes.

Altus Oilfield was one of four companies, including Schlumberger Seaco Inc. of USA, Dubai based Trans Ocean Industries and Services and Lenna of Iran, who signed an agreement with TEPZA in May 2014, to take advantage of  the opportunity, which includes services to the oil exploration and gas extraction companies working on the prospective wells, onshore and offshore of the region.

Tanzania has a burgeoning hydrocarbon sector clustered around the Mtwara deepwater port which has an inlet into the Indian Ocean. Natural gas was discovered in the region in 1982 and was monetized in 2006. The government is constructing a 561 km pipeline to evacuate some of the gas to  Dar es Salaam, the country’s main city. A $1 Billion, 400MW power plant is to be constructed in Mtwara Region, including a transmission line to Songea, a city several kilometres away near Lake Malawi. The volume of natural gas needed for the pipeline, power station and other industries in Mtwara are available in the region.

But Tanzania has, in the last four years, witnessed massive gas discoveries in deep waters of the Indian Ocean, which have boosted estimated reserves from  eight  to 42.7 Trillion cubic feet, according to government’s own data.

Companies will be allocated land in the Oil Field Supply Base to set up infrastructure needed to service companies now engaging in oil and gas exploration in the country including British Gas and Statoil.