“President Jacob Zuma moved Joemat-Pettersson from Agriculture, Forestry and Fisheries, where she had a relatively controversial tenure”, reports the online daily, Engineering News, “having been found by the Public Protector to have behaved improperly in the management of a $75-million State fishery-vessels tender – a finding she is contesting”. 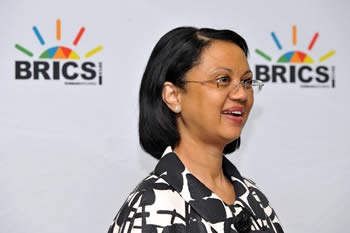 The Mail and Guardian describes the appointment as “the biggest question mark in the cabinet shuffle”, saying it “has sparked the strongest reaction, ranging from concern to absolute outrage – particularly in light of the possibility that a nuclear build, involving trillions of rands (the local currency) in tenders, may be on the horizon”.

In Ms. Joemat-Patterson’s appointment, Business Unity South Africa (BUSA) the country’s principal representative of business and the Democratic Alliance (DA), the main opposition party, found an unlikely alliance. Engineering News quotes BUSA as making a reference to the Minister’s “turbulent” performance at Agriculture, Forestry and Fisheries and “cautioned that any similar instability at Energy could have serious implications for South Africa’s competitiveness and growth prospects”.

The DA, expectedly, stretches the argument, saying that her appointment to the portfolio is “yet another indication that President Jacob Zuma is far more concerned with creating jobs for his pals than he is about good governance” and insisting she “should be fired, not promoted”.

Mail and Guardian is, as usual, acerbic. “Joemat-Pettersson enters at a time when South Africa’s energy balance hangs by a thread, and poor decisions will result in problems that will dog the country for 30 or 40 years to come and have a huge economic impact”.

« The Day’s Catch Is Poor, but A Lot of Money Comes from Rent
In Aje Field Development, Gas Will Come later… »