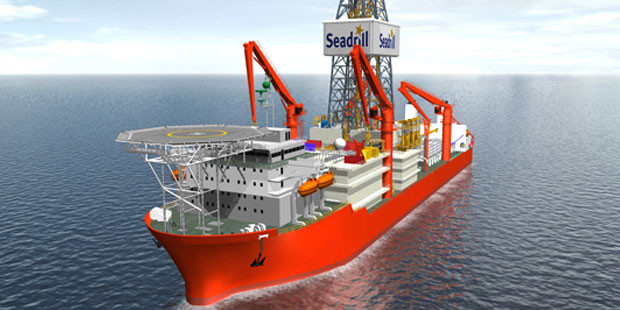 French major TOTAL has awarded Seadrill Limited  a five year contract for employment of the newbuild ultra-deepwater drillship West Jupiter, in support of the EGINA ultra-deep offshore project in Nigeria.

“The contract .. has a total revenue potential for the primary contract term of approximately $1.1 billion inclusive of mobilization”, Seadrill says in a statement. “Seadrill’s total consolidated backlog stands at approximately $20 billion with the execution of this contract”.

Seadrill has one deepwater rig in operation offshore Nigeria. It is West Capella drilling on the deepwater Usan field for operator ExxonMobil, who took over the operatorship of the field after TOTAL sold its stake in late 2013.

The West Jupiter is one of eight 6th generation drillships currently under construction for Seadrill and is expected to be delivered from the Samsung Heavy Industries shipyard in Geoje, South Korea in August 2014.  The rig will be outfitted to work in up to 3,048 metres of water and is capable of water depths up to 3,658 metres and drilling depths up to 11,430 metres.

Per Wullf, Seadrill CEO commented, “We are very pleased to have been chosen by Total and its partners for this important project. This contract provides an opportunity to deepen our relationship with a key customer and strategically increase our rig fleet in Nigeria, adding the West Jupiter alongside the West Capella which has been operating in the Usan field Offshore Nigeria since 2008.  Seadrill takes pride in continuing to build its presence in the Nigerian oil & gas industry”.