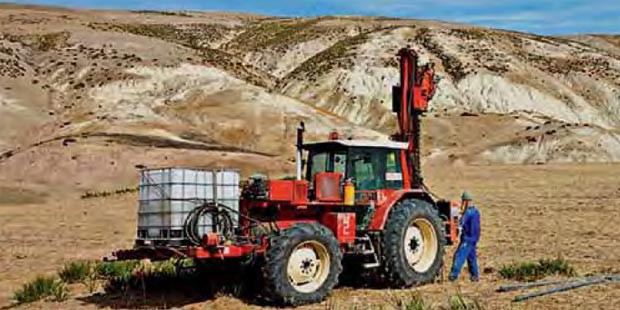 The LTU-1 probe follows up on the three wells that were drilled, commencing in October 2013, which intersected gas‑bearing horizons as identified from pre‑drilling seismic interpretation, “but contained less than the required thickness of net gas pay considered necessary to support a declaration of commerciality and so were plugged and abandoned”. The location for the drilling of each of those wells was based upon legacy 2D and swath seismic data. Now, with the acquisition and processing of 3D seismic data on the Rharb permit completed and quickly interpreted, Gulfsands is hoping for the discovery of commercial gas accumulations during 2014. ”There is considered to be a meaningful near‑term value creation opportunity contained within the proven conventional and shallow depth gas play in the Miocene horizons within the Rharb Centre permit”, the company says.

LTU-1 is designed to be drilled to a total vertical depth of approximately 1,180 metres and will evaluate predicted Miocene-aged sandstone reservoirs contained within a fault-bound structural closure that have been identified from 3D seismic data as having potential to be gas bearing. LTU-1 is located up dip structurally from a previous well – Lalla Yetou-3 – that found gas-bearing sands.

Gulfsands acquired its interests in the Rharb Centre, Rharb Sud and Fes permits through the acquisition of Cabre Maroc Limited, a wholly owned subsidiary of Caithness Petroleum Limited, on 16 January 2013. Gulfsands and ONHYM (the Moroccan oil and gas regulator) are co‑venturers in respect of the Rharb Centre and Rharb Sud permits (Gulfsands has a 75% working interest post ONHYM participation);whilst Gulfsands and Caithness Petroleum Limited are co‑venturers.

Gulfsands said it expects drilling operations at LTU-1 to be completed within 28 days, ie, by July 15, 2014.