Jonathan’s Show, No Show in Eket 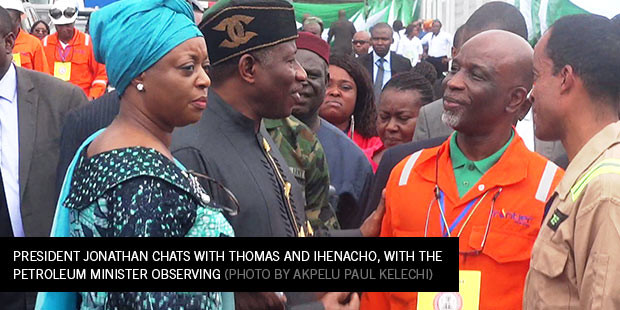 Nigerian president Goodluck Jonathan ignored the protocol in Eket, in the southeastern Niger Delta basin last Thursday, August 14, proceeding directly to the gas processing plant, as he arrived in a motorcade for the commissioning, with some of his cabinet ranked ministers.

His move led to a scramble among the several hundred guests, many of whom had waited for upwards of five hours, enduring bouts of rain under waterlogged canopies.

Frontier Oil Limited and Seven Energy Limited, joint partners in the two hundred million standard cubic feet per day (200MMscf/d) processing plant, had flown 15 journalists from Lagos into town the previous day, accommodating them overnight and busing them, along with the companies’ directors and other dignitaries, into the venue as early as 7.30am.

Armed soldiers, playing the combined roles of bouncers and ushers, checked in guests with invitation cards that had clear instructions: “Guests must be seated by 8am”. Colourful programme brochures listed speeches by the President, the Petroleum Minister, Governor of the host state and CEOs of the partner companies.

On the soggy grounds of the venue, hurriedly prepared after the one-week notice the president’s men had given the organisers, royalty of the town of Eket, Local Council chieftains, representatives of local women organisations, local stalwarts of the ruling political party and corporate invitees sat patiently with ranking officials of the Nigerian ministry of petroleum, making guesses as to when the head of state might arrive.

Protocol officers from the state house in Abuja strutted around the place with an air of importance. One gruffly demanded identification from an official of the Department of Petroleum Resources, the industry regulatory agency, insisting, “this section is for corporate guests”.

For all the shifting hither-thither, the President did not arrive.

News wafted in that the event was not as high on the Commander-in-chief’s agenda as the owners of the project had imagined. True, this processing plant, located on a gas field officially designated as marginal, is the largest to be developed as a greenfield project by any private, Nigerian owned company, for domestic gas supply. True, the Uquo facility has been contracted to supply gas to two power plants with combined generation capacity of 750MW.

More important on the President’s itinerary was the ground breaking ceremony of a methanol plant with no clearly demarcated site and no guarantee of gas supply. The president was to spend the early hours of the day in this non-descript place hemmed in between the Ibeno beach and ExxonMobil’s Qua Iboe Terminal. Nigeria’s chief executive officer had prioritized a project with no certainty of final investment decision over a plant raring to deliver fuel to 10% of the nation’s electric power capacity.

As the proceedings commenced well after the president’s arrival around 1.30pm, Dada Thomas, CEO of Frontier Oil and Phillip Ihenacho, his opposite in Seven Energy, found themselves on either side of the Number One.

“We are happy with what we have seen today”, Goodluck Jonathan commented. “Seven Energy and Frontier Oil deserve commendation for combining their individual capacities to deliver this project which will have multiplier effect on the economy such as increasing national power output, employment opportunities for the host communities and Nigerians”, he said, “and additional revenue for both the Federal Government & Akwa Ibom State”.

I was not sure if what I’d witnessed was an anti-climax. But the president’s gesture of showing up at all was extremely important to the heads of the two partner companies. An hour after his entourage had zoomed off, for some other matters, culminating in the State Banquet Dinner in Uyo, Ihenacho and Thomas shook hands and congratulated themselves. “I think we’ve done very well”, said one. “Yes, I agree”, the other muttered in response. The power of a president’s visit.