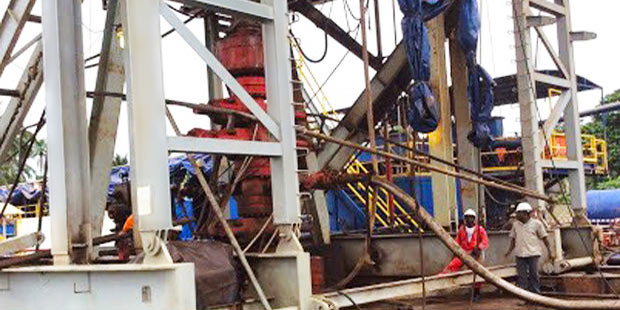 Ogini-5, the first of a 37 well development, will take two months to drill.

The Ogini-5 appraisal/development well on the Oil Mining Lease (OML) 26 in the western Niger Delta basin will likely be finalized at the end of September 2014. The well was spud on August 1, with a pilot hole to acquire the crucial data that will support the rest of field development. Ogini-5’s commencement came three weeks after schedule, largely due to community challenges. Durga-2 rig, owned by British Oil Gas Exploration (BOGEL), will be active on the Ogini field for several months afterwards, drilling four more wells back to back, according to the contract. OML 26 is operated by the state hydrocarbon company NPDC, with Afren subsidiary First Hydrocarbon Nigeria (FHN) in a 55:45 Joint Venture partnership.

Ogini -5 is the first well drilled on any of these four leases (OMLs 26, 30, 34 and 42), acquired by Nigerian companies and Nigerian led consortia from Shell/TOTAL/ENI between 2011 and 2012. After the divestments, the NNPC had transferred its 55% interest to its subsidiary, NPDC, as operator of the blocks. The buyers had paid between $102Million and $850Million for the Shell/TOTAL/ENI stakes and even though they admit that operatorship was not on the table during the sale, their concerns were that NPDC was not a world class manager.

FHN will not comment on the quality of NPDC operatorship on the Ogini field development. Authoritative sources at the Department of Petroleum Resources reveal that the Field Development Plan is a 37 well development. Most of the wells are producers; about three wells will be water disposal wells and there will be considerable gas lift operation, as Ogini field is largely a heavy oil field.