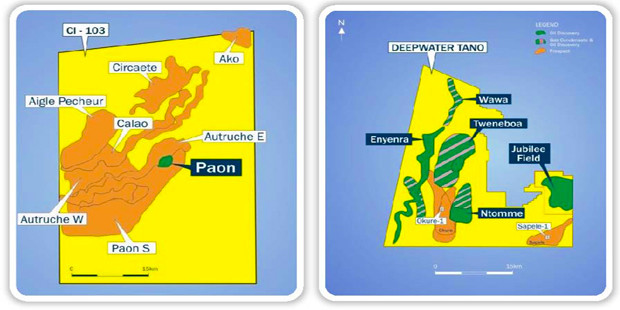 By John Ankromah, in Accra

Anadarko is reducing its exposure to exploration risk in the transform margins of West Africa. It has agreed to sell 20% ownership interest in Cote d’Ivoire’s Block CI-103 Hydrocarbon Production Sharing Contract to Mitsubishi Corporation (MC), a Japanese company. In April 2014, the American independent farmed out 30% of its stake in Liberia’s Block 10. It is looking to farm down in Sierra Leone as well.

Block CI-103 is the site of a disappointing appraisal well, Paon- 2, reported in December 2013 by operator Tullow Oil as having encountered only water in the stack of sands equivalent to the hydrocarbon column in Paon-1. Tullow, however, says that pressure data from the discovery and appraisal wells suggest an oil column of at least 755 feet between both locations. Anadarko says that the transfer of the interests to Mitsubishi will be finalized once the government of Côte d’Ivoire issues the required approvals.

Block CI-103 is located about 50 kilometers off the coast of Côte d’Ivoire, in water depths of 2,000 meters.  Until the completion of this transaction, Tullow Oil holds 15% (plus a 15% carried interest) with Anadarko Petroleum (55%) and the Societé Nationale d’Opérations Pétrolières de Côte D’Ivoire (Petroci) (5% plus a 10% carried interest). The partners have received approval to continue with appraisal operations, having confirmed oil and gas deposits at an exploratory well they drilled in 2012. Further evaluation works for deposits, including conducting shallow hazard surveys and drilling additional appraisal wells, will proceed with MC as a new entrant, while the parties work towards reaching a final investment decision.