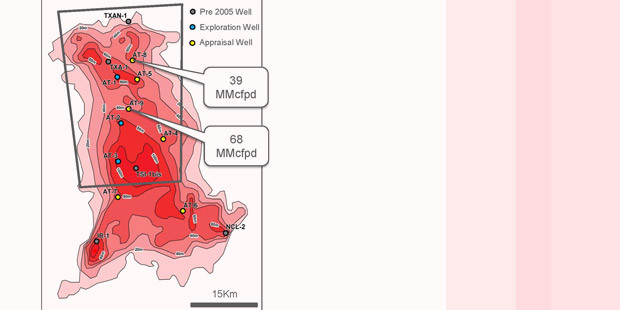 Irish minnow, Petroceltic, reports it has concluded Gas Sales Agreement on its Ain Tsila field in Algeria with the government. It also awarded FEED contract, both of these in early September 2014.

“Following the execution of a legally binding Heads of Terms for the Gas Sales Agreement with  Sonatrach (the Algerian state hydrocarbon company), in 2012, the comprehensive Gas Sales Agreement detailing operational procedures and processes required for gas nominations and payments has recently been signed by all partners”, the company says in a recent operational update. “In addition, the Front End Engineering and Design (“FEED”) contract was awarded to Chicago Bridge and Iron and signed on 9 September”.

During the course of the FEED studies, the project cost estimate and schedule will be updated and the major project related construction contracts are expected to be tendered in late 2014 and awarded in 2015. Subsurface engineering and geoscience activities will focus on optimising the development plan prior to the commencement of drilling in early 2015. The Groupement will establish the technical and logistical office in Hassi Messaoud and development operations will ramp up in the Ain Tsila field, allowing for the mobilisation of drilling rigs and construction crews in 2015. Project execution including the drilling of 24 wells and construction of gas processing plant and related infrastructure will run from 2015 to 2018. Petroceltic books 304MMBOE for the field.