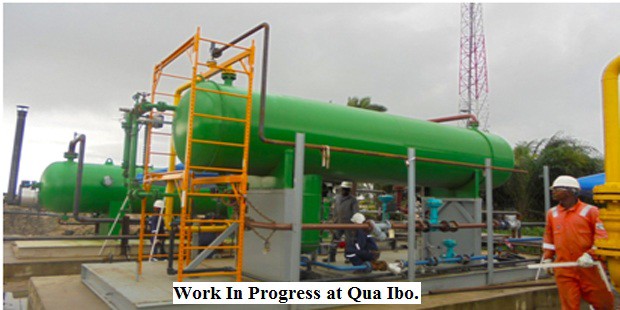 Qua Ibo may turn out to be the 9th marginal field-of the class of 2003- to move to sustained commercial production.

Work on the surface production facility and flow station is far advanced on the Network E&P held Qua Ibo field in Oil Mining Lease (OML) 13, onshore southeast Niger Delta. The facility is 80% completed, according to officials in Network and Oando, both partners in the project. There’s a good chance that the field may come on stream by Christmas 2014. That is if, in addition to the production facility, the tie-in facility between the ExxonMobil Qua Ibo Terminal QIT, from where the crude is to be evacuated, and the field’s production facility, is established by then.

Network and Oando, both Nigerian independents, are 60:40 working interest partners in the field, which was awarded to Network by the Nigerian government in February 2003. They are hoping to produce at least 1,000Barrels of Oil per Day (BOPD), to start with. Oando farmed in as Technical and Financing partner to the project in 2012, with 40% working interest. If the field comes on line by Christmas, with the infrastructure currently being installed, it will be the ninth marginal field, out of the 24 awarded in 2003, to move to sustained production. Between 2007, when Platform commenced production of Egbeoma field and 2012, when Uquo field flamed to life, six of the “Class of 2003” have gone through the hoops of field development and are producing on a sustained basis.

In its 1st Half 2014 report, Oando Energy Resources (OER), the upstream subsidiary of Oando Plc says it expects  “cash inflows from sales of production of crude oil from Qua Ibo”, adding “the …Corporation expects that production form this field will now commence in the fourth quarter of 2014”

The company says it incurred capital expenditures of about $9.4 million on pipeline and facility costs as well as flow station construction in the six months ended June 30, 2014. There is no information on the cost up to September 4, 2014. “Oil production from the Qua Ibo field’s D5 reservoir is expected to commence in the fourth quarter of 2014. Production from the C4 reservoir of the Qua Ibo is expected to commence in the first quarter of 2015”.