NNPC in Desperate Search for Funds to Pay For OML 25 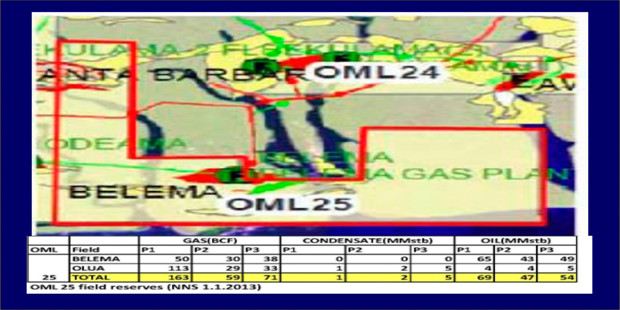 After blocking the sale of asset to Crestar&Co, the state hydrocarbon company is stumped for cash
By Fred Akanni, Editor

The Nigerian state hydrocarbon company NNPC is desperately looking for the $453Million to pay for the 45% stake owned by Shell, TOTAL and ENI, in Oil Mining Lease (OML) 25, located onshore Eastern Niger Delta.

With orders from the petroleum minister, Diezani Allison-Madueke, on the advise of principal officers in the ministry of petroleum resources, the government company pre-empted the sale of the asset to a special purpose vehicle including Nigerian independent Crestar Integrated Natural Resources Limited (55%) and Canadian minnow James Bay Resources (45%), invoking its right of first refusal. The SPV was the preferred bidder for the 45% stake in the acreage, having offered $453Million and beaten off formidable competition, including Lekoil, a consortium comprising of Greenacreas Energy, CCC and Signet Petroleum, as well as the daunting combination of Niger Delta Petroleum (NDPR) and SAPETRO.

It is the first time since Shell began divesting from onshore Nigeria, in January 2010, that the government would make such a move and OML 25 is the only one of the four assets in Shell’s current round of divestment, to have been affected by such a move.

Seven months after it announced the winning bids, Shell, in the last week of October 2014, concluded Sales and Purchase Agreements (SPA) with all the preferred bidders, including a consortium led by Aiteo, which won the 45% stake in OML 29, the juiciest block on offer, for $2.6Billion; Newcross, which won OML 24, with $900Million and Eroton, including Midwestern Oil and Gas and Mart Resources, which won OML 18 for $1.2Billion.

In terms of the Joint Operating Agreement, under which the right of first refusal is invoked, NNPC ought to be able to pay the $453Million within 30 days of the pre-emption. A number of companies have come forward, but the state owned company is “being careful not to get in bed with a company that will twist their arms”, according to people familiar with the transaction. NNPC’s failed involvement with Atlantic Energy as a financing partner is still an issue that the company’s officials are worried about.

There’s a general understanding among players in the Nigerian oil industry, that NNPC’s invocation of right of first refusal, has less to do with economics than personal vendetta; the minister was merely trying to get at Osten Olorunsola, chairman of the board of Crestar Integrated Natural Resources Limited, who she fired as Director of Petroleum Resources in June 2013, but no one is willing to talk openly about it. Part of what drives this thinking is that the three other winners are to be allowed to be operators of the assets, in contrast to the previous divestment in which NNPC stepped in to take over operatorship. So, indeed, government had taken a decision not to be involved in this set of assets, except as a non-operating partner and tax collector. When the news of the pre-emption filtered into the conversations on the side of the Africa Oilweek conference in Cape Town, South Africa last week, there were whispers of “oh it’s sad that she could do this to him”, but people would still not talk beyond expressing their sadness; most upstream agreements in Nigeria are at the pleasure of the minister, so people simply clam up.

But Africa Oil+Gas Report’s checks indicate that the minister’s instruction was not unilateral; it was indeed, encouraged by request from some principal officers in the petroleum ministry.

What is not clear is why those officers were keen on stopping Crestar from getting the asset, and in the process reinforce the misgivings that access to acreages in Nigeria is fraught with uncertainty.

The irony is that Olorunsola does not own Crestar; the founder, CEO and director of the company is Adeniyi Olaniyan, a former Shell technical personnel with a bachelor’s degree in Geography from the Lagos State University and  master’s degree in Engineering Geology from the Obafemi Awolowo University. Olaniyan is also executive director of James Bay Resources, the Canadian partner. When, in the course of a conversation he was asked what he thought about the name Osten Olorunsola being the reason for Crestar failing to clinch OML 25, he simply responded: “At this point, I will stop”.