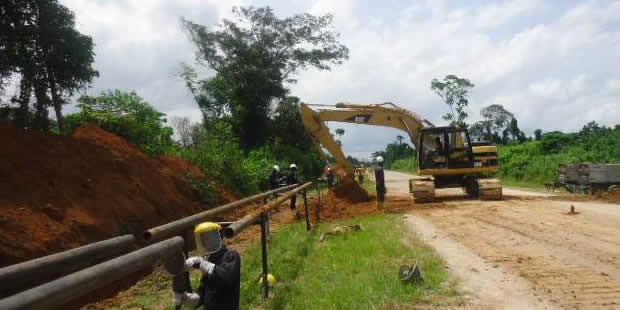 Sahara Energy, the Nigerian independent, is carrying out an extended production test on the Oki field in Oil Prospecting Lease (OPL) 274 in northwestern Niger Delta. This is preparatory to first oil from the field sometime before the end of first half 2015. The company successfully drilled two appraisal/development wells and an exploration well between September 2013 and August 2014, with the first appraisal/development well logging 64metres net pay in 12 sands and flowing 3,129 barrels of oil per day (BOPD) in several zones. The second appraisal/development well encountered 91 metres net in 19 reservoirs and tested at 2,397BOPD. Sahara did not disclose the number of sands that were tested. The exploration well found 30 metres net oil sands in four levels and flowed 1,600BOPD. The company reported that seven new pays showed up in the two appraisals.

Oki field straddles NPDC operated Oziengbe South Field in Oil Mining Lease (OML) 111, and there is unitization agreement between the two companies. Under the terms of unitization, Saharawill produce into the NPDC operated flowstation on the Oziengbe South Field. The unitized field is named Oki-Oziengbe South.Sahara installed four flowlines to the flowstation. The company forecasts initial production of 4,000BOPD from Oki-Oziengbe South-4, which is the first of the two appraisal/development wells. “This will double to 8,000BOPD in 2015, once Oki-Oziengbe South-5 is completed”, according to Curtis Cohen, Chief Oprating Officer, Sahara Group, Upstream. Existing facility at the Oziengbe field constrain production delivery, he told the Lagos Oil Club on September 30, 2014. The company looks forward to new Flowstation and plant capacity expansion to grow production.