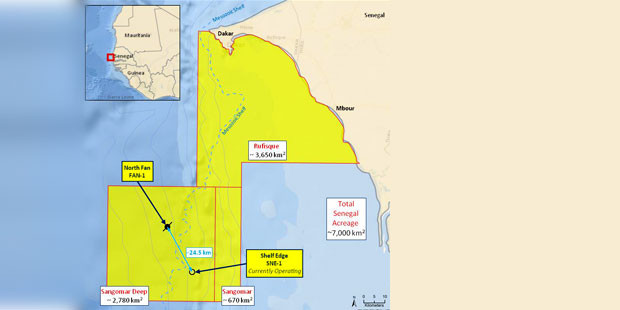 Scottish minnow, Cairn, has announced a second commercial discovery offshore Senegal in the space of one month.

The SNE-1 well is located in 1,100 metres (m) water depth and approximately 100 kilometres (km) offshore in the Sangomar Offshore block with a target depth of ~3,000 metres and targeting the Shelf Edge Prospect.

“Intermediate logging of the SNE-1 well has confirmed hydrocarbons in the Cretaceous clastics objective”, Cairn said in a release. This target is of similar age to oil bearing sands found approximately 24 km away in FAN-1, which was reported as an oil discovery on October 7, 2014.

“As operator, Cairn has now issued Notices of Discovery for the SNE-1 well and FAN-1 well to the Government of Senegal on behalf of the Joint Venture”, the firm explained..

Further evaluation of this zone is continuing. The deeper target of karstified and fractured Lower Cretaceous shelf carbonates is yet to be reached. A further announcement will be issued once operations are completed on SNE-1.

The results of the FAN-1 well and the final analysis from the SNE-1 well will be used to decide optimal follow up locations to determine the extent of the hydrocarbon accumulations and additional activity which is targeted for 2015 onwards.