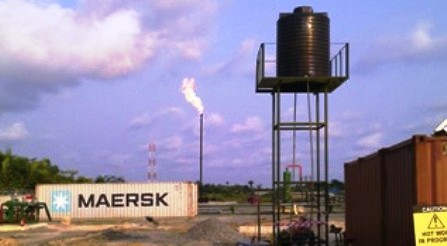 ..ExxonMobil not ready to accept crude into QIT for export

The Central Production Facility for the Qua Ibo marginal field, in Oil Mining Lease (OML) 13, is tested and ready for first oil. “The process area is about 95% complete with the outstanding work being the fire water system”, according to engineers from Network, (holder of the asset) and Oando, (the 40% partner), who carried out a full process audit on December 5, 2014. “This outstanding work will however, have no impact whatsoever on the immediate production of the first oil. All the equipment have been fully installed, grounded and earthed with all their various ancillary facilities”, they reported to the Joint Operating Committee of the two companies. “The restriction is in the fact that continuous operations cannot be carried out now as QIT (the ExxonMobil operated export evacuation terminal) is not ready to receive the oil from the facility”, the report adds. “In the interim, the flow back line constructed for the purpose of routing the oil from the wells to the temporary storage at the well head was checked and confirmed okay to be used to carry out the first oil flow from the wells”.

Network and Oando are 60:40 working interest partners in Qua Ibo field, which was awarded to Network in February 2003. They are hoping to produce at least 1,000Barrels of Oil Per Day (BOPD), to start with. Oando farmed in as Technical and Financing partner to the project in 2012, with 40% working interest. If the field comes on line by Christmas, it will be the ninth marginal field, out of the 24 awarded in 2003, to move to sustained production. Between 2007, when Platform commenced production of Egbeoma field and 2012, when Uquo field flamed to life, eight of the “2003 Class” have gone through the hoops of field development and are producing on a sustained basis. Qua Iboe will also be the second of the three marginal fields in the FUN (Frontier Oil, Universal Energy and Network E&P) cluster, to come on stream. The FUN group have jointly executed agreements to send their crude through ExxonMobil’s QIT.

In its 1st Half 2014 report, Oando Energy Resources (OER), the upstream subsidiary of Oando Plc says it expects  “cash inflows from sales of production of crude oil from Qua Ibo”, adding “the …Corporation expects that production form this field will now commence in the fourth quarter of 2014”