Ghanaian authorities have approved the Plan of Development (PoD) for the Sankofa complex offshore Ghana. ENI, the Italian major, is the operator of the Offshore Cape Three Points (OCTP) block in the Tano Basin, where the fieldis located. 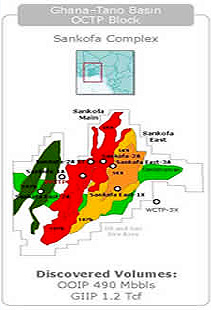 The PoD envisages first oil in 2017 and first gas by 2018. ENI estimates discovered volumes in the complex as 490 Million barrels (MMbbls) Original Oil In Place (OOIP) and 1.2 Trillion Cubic Feet (Tcf) of gas in place (GIIP).

The government is particularly interested in Sankofa development because of what it means to gas production in the country.  “This project promises to deliver up to 170 million cubic feet of gas per day for the next 20 years and put Ghana on its way to a future where one of the critical constraints to power generation (cheaper fuel) will be addressed,” according to a statement by the Ghanaian government. The key challenge is the processing and transportation infrastructure to get the gas to several power plants in the country. Ghana is building a number of gasfired thermal plants and even importing thermal barges, all of which will need at least 400MMscf/d by 2018.

The $6Billion project includes floating production storage and offloading (FPSO) vessel, which will be the third in the country..Oil production is expected to peak at around 50,000BOPD.

« Conoil Production Plunges to 9,000BOPD
‘Our’ Oil Theft Is Less Than ‘Their’ Oil Theft »