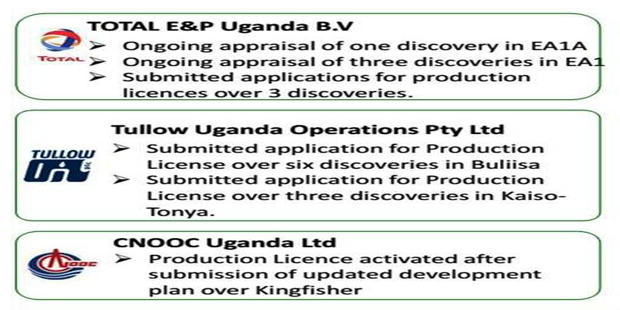 Uganda is evaluating five applications for field development plans for five fields and clusters of fields in Uganda’s Albertine basin.

The country issued its first production licence, in September 2013 to CNOOC Uganda Ltd, who is developing the Kingfisher field in the southernmost part of the current, proven oil part of the basin. CNOOC estimates the in-place oil in the field at 635 Million barrels “of which 196 Million are recoverable”.  The company says the Kingfisher field will be developed to produce between 30-40,000BOPD.

“Those too are being discussed”, says Fred Kabanda, principal geologist and head of regulatory unit at the ministry’s Petroleum Exploration and production department.  Mr. Kabanda did not give likely timeline for finalizing these discussions.