Mozambique Extends Bid Round Till April 2015 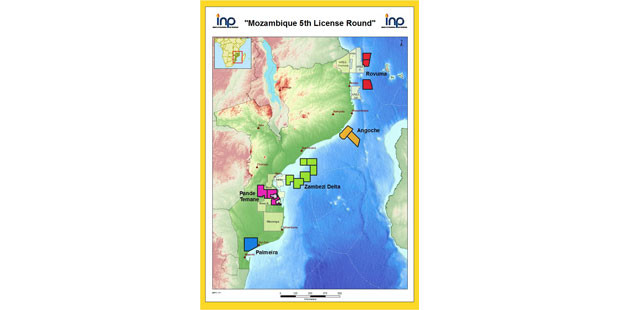 Mozambique has extended the deadline for submission of bids in its fifth open lease sale to April 30, 2015. The initial deadline of January 20, 2015 was announced at the launch of the bid round in London in late October 2014.
Industry regulator National Petroleum Institute (INP) says the extension is to allow companies additional time to complete applications, as a number of them have complained about the tight time frame of the bid round.
The announcement of bid round extension  comes days after a new cabinet was assembled by new President Filipe Nyusi, elected during the October 2014 general elections. The cabinet excludes Esperança Bias, who has overseen the emergence of Mozambique as a gas rich country (over 100Trillion cubic feet discovered in the last five years), from her position as minister of mineral resources in the last decade. In the new dispensation, the ministries of energy and mineral resources have been merged under Pedro Couto, Deputy Minister of Finance in the previous government.
Last December, the outgoing cabinet approved a new Petroleum legislation, which is an extensive revision of the 2001 Petroleum Law, the fiscal law for petroleum activities as well as the fiscal legislation, essentially responding to uncertainties around financing terms, the development of LNG Facilities, the LNG Facilities Agreement, the main terms for consortium companies to develop LNG Facilities, the unitizing of cross boundary facilities, LNG facilities contracts, the prioritization of mega projects, the Final Gas Master plan, Government revenues and pricing formulas. The terms of the bid round will be largely governed by this law.
In the new law, Mozambique has set a royalty rate of 10% on oil and 6% on gas, but these rates will be reduced by half for domestic market obligation output.
The 15 blocks on offer in this bid round are located in the prolific offshore Rovuma basin, as well as offshore Zambezi and Angoche basins and onshore around the Pande-Temane concession and Palmeira.
There are 74,724 sq km of acreage in this round. In the deep-water areas 11 blocks in the northern Rovuma Basin, Angoche Basin and Zambezi Basin are available, with the other four being onshore. Three blocks – R5-A, R5-B and R5-C – are also up for grabs in the prolific Rovuma offshore basin, close to Areas 1 and 4 where Anadarko and Eni made their large gas discoveries, now under development.
In the Angoche area, two blocks – A5-A and A5-B – are on offer, while there are six blocks in the central Zambezi area: Z-5-A, Z5-B, Z5-C, Z5-D, Z5-E and Z5-F.
Shortlisted companies will eventually be invited for E&P concession agreement (EPCC) discussions, followed by eventual awards.