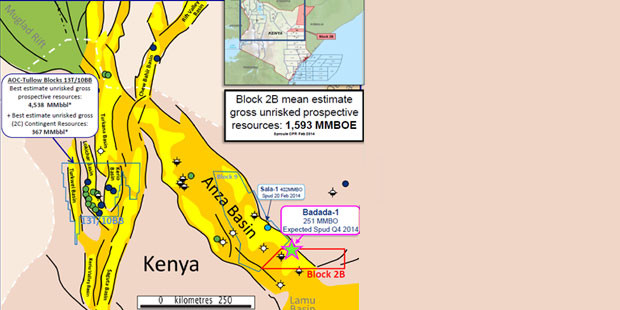 Lion Petroleum Inc. has spud Badada-1 well, in Kenya’s onshore Block-2B, with the GW-190 rig. The block is located in the southern Anza Basin, a Cretaceous rift basin with proven source rock and several prospects and leads.

The operator is a Kenyan subsidiary of Taipan Resources Inc., with 30% working interest. Partners include Tower Resources, 15% and Premier Oil 55%.

Lion’s gross mean unrisked recoverable resources estimate for the  Pearl prospect on which Badada is being drilled, is 251 MMboe (Source: Sproule International Limited, February 2014). The well is planned to be drilled to a total depth of between 3,000 and 4,000 metres, to test Tertiary age reservoirs analogous to those in the Lokichar basin where Tullow and Africa Oil have made discoveries with best estimate unrisked gross (2C) contingent resources totaling 616MMbbls (Africa Oil Corp. Corporate Presentation dated September 2014). The operator expects drilling to take up to 70 days to complete.

Tower Resources, a non -operating partner on the property, believes that “Badada-1 is a potential play opener, which if successful, will de-risk other prospects and leads in Block-2B and generate considerable upside from a follow-on exploration programme in 2016/17″.