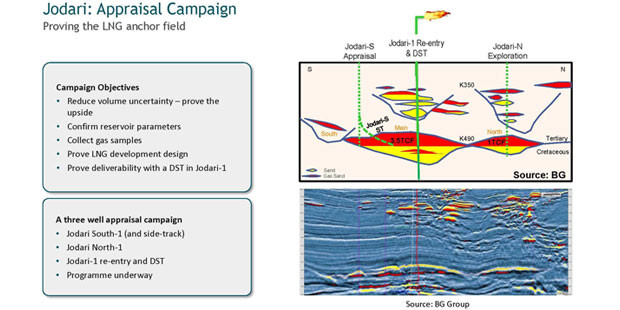 Any timing on LNG Development in Tanzania, as in other projects “has to be timed with how we see the market demand on one side and the cost of supply or cost of construction on the other side”, said BG’s Chief Operating Officer Sami Iskander. There’s no doubt that the resource is large enough for a major project.  “Over the last three and a half years we drilled 16 wells, had 13 discoveries and four more successful appraisal wells and three tests. So we had a 100% success ratio and proved up 16 Trillion Cubic Feet of gross recoverable gas which is about 2.6 billion barrels of oil equivalent. So that is a significant volume, and now we’re really moving onto the above surface issues because we’ve proved up enough volume for a two-train LNG plant” remarked Malcolm Brown, the group’s Executive for Exploration. But the project hasn’t advanced much above surface. BG’s top executives were speaking with a selection of industry analysts, after the presentation of the company’s fourth quarter 2014 report. Andrew Gould, the interim Executive Chairman, had earlier noted that in the current circumstances in the oil and gas business “the likelihood is that any sanctioning of projects in the short term would only take place on the periphery of existing fields that we have that are producing. And I don’t think you’ll see us doing anything much beyond that in the short term”. Even so, the company harbours no doubt about the current and future profitability of LNG. “It’s my view that turmoil in the markets for a couple of years may actually improve the profile at which new LNG comes to the market which would be considerably to our advantage given that we have access to a lot of the low cost resource in LNG”, Gould argued. To which Steve Hill, BG’s Head of LNG Shipping and Marketing agreed: “We are still seeing strong demand, the Asian LNG market grew last year despite the many challenges in the economy. There are 12 new LNG terminals due to come on stream this year so we’re seeing an ongoing growth in Asian demand which is very important for our business.