The Western Cluster Threatens a Flood 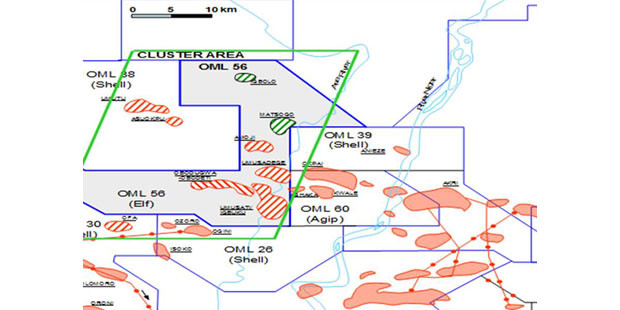 Four marginal fields in the NW Niger Delta, operated by local Nigerian firms, produced over 39,000BOPD at peak in January 2015. The fields are located close to each other and their crudes are evacuated via common facilities, in a cluster arrangement, which is why they are collectively called ‘The Cluster’.
Energia operated Ebendo field, Pillar Oil held Umuseti and Midwestern Oil and Gas managed Umusadege field, all opened up their taps, increasing total production by over 18,000BOPD. Umusadege alone, which is the largest field in the cluster, increased production by about 100% in the space of two months, delivering “a record daily gross volume of approximately 29,000 BOPD in late January 2015”, according to Mart Resources, technical partner to operator Midwestern.

Ebendo topped up production by close to 40% to average 4,800BOPD (injected crude). Pillar Oil increased its output by 20% from 2,500BOPD to 3,000BOPD. The drab performer was Platform Petroleum operated Egbeoma field, which remained at 2,100BOPD. Platform is the only company that has not completed a new well on its field in the last five years. The company credits its ability to produce as much as 2,100BOPD, to “production optimization”. Company executives say their plan is to drill at least a well in fourth quarter 2015, depending on anticipated improvement in oil price.

The key reason for the output surge in the cluster is the easing of ullage constraints by the commissioning of the Umugini pipeline as an alternative route to market. Previously, all the fields were evacuating through ENI operated Kwale facility, which limited their injection to 23,000BOPD.

The 51 km Umugini line came on stream in November 2014, connecting Umusadege and Ebendo fields to the Shell operated Trans Forcados export pipeline. Umugini has a capacity to pump 45,000BOPD, which Shell could take, and it is almost double the 23,000BOPD accepted by ENI.

The initial edition of this article, published on February 12, 2015, credited Egbeoma for topping “up production by close to 40% to average 4,800BOPD”. The error has been corrected here. That credit belongs to Ebendo.