Paon-3 Turns the Fortune Around 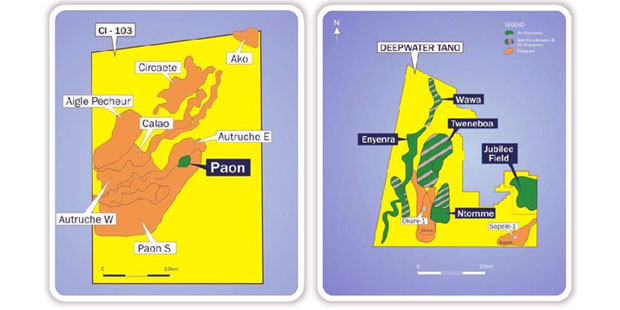 U.S independent Anadarko has had to accelerate drilling the fourth well on the Paon structure in Cote d’Ivoire, after the third well turned out much better than widely expected.
The company went ahead and drilled Paon- 4A after the Paon-3AR appraisal well, drilled six kilometres downdip to the discovery well, encountered more than 28.6 metres (or 94 feet) of pay. Both wells are located in block CI-103 offshore Cote d’Ivoire. “Paon-3AR established an oil/water contact and appears to be in communication with the Paon-1X well”, Anadarko declares in a statement.
Partners in block CI-103 include Anadarko 35%, Tullow Oil 30%, Mitsubishi 20% and state hydrocarbon company Petroci 15%.
Paon-4A, located 9.7 km east of Paon-3AR, “penetrated more than 11.3 metres of pay in the target section and defined the eastern extent of the reservoir”, Anadarko adds. The statement does not say whether the hydrocarbon fluid was oil or gas or both.
“The partners and the government are in talks concerning additional appraisal drilling activity this year, which would include a drillstem test”, Anadarko says.