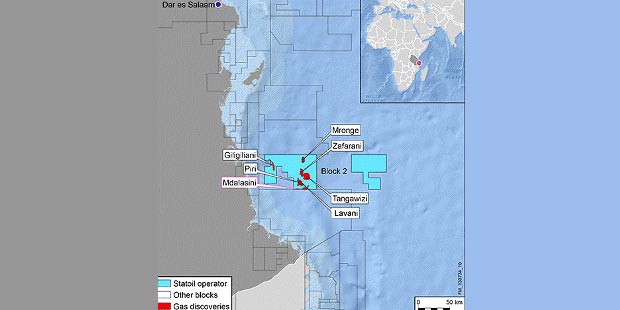 Norwegian operator Statoil has declared its latest exploration well off Tanzania as a large new discovery. “The discovery of an additional 1.0-1.8 trillion cubic feet (Tcf*) of natural gas in place in the Mdalasini-1 well, brings the total of in-place volumes up to approximately 22 Tcf in Block 2”, the company says.

The Mdalasini-1 discovery is located at a 2,296-metre water depth at the southernmost edge of the block. The new gas discovery has been made in Tertiary and Cretaceous sandstones. This discovery “marks the completion of the first phase of an efficient and successful multi-well exploration programme offshore Tanzania,” says Nick Maden, senior vice president for Statoil’s exploration activities in the Western Hemisphere.

“Since the start of the programme in February 2012, we have drilled 13 wells and made eight discoveries, including Mdalasini-1. We still see prospectivity in the area, but after appraising the Tangawizi-1 high-impact discovery, which was made in March 2013, there will be a pause in the drilling to evaluate the next steps and to mature new prospects,” adds Maden.

Statoil and ExxonMobil are coventurers in Block 2, splitting their stakes 65% to 35% respectively. But Statoil says that it drilled this particular well entirely without ExxonMobil’s input. “Statoil has drilled the Mdalasini-1 well with a 100% working interest. Previously Statoil and co-venturer ExxonMobil have made seven discoveries in Block 2, including the five high-impact gas discoveries Zafarani-1, Lavani-1, Tangawizi-1, Mronge-1 and Piri-1, as well as the discoveries in Lavani-2 and Gilligiliani-1. Statoil operates the licence on Block 2 on behalf of Tanzania Petroleum Development Corporation (TPDC) and has a 65% working interest”, the statement adds.

“ExxonMobil Exploration and Production Tanzania Limited holds the remaining 35%. TPDC has the right to a 10% working interest in case of a development phase. Statoil has been in Tanzania since 2007, when it was awarded the operatorship for Block 2”.