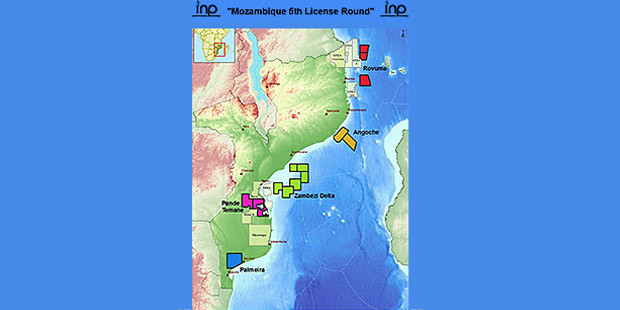 Mozambican authorities have extended the deadline for submission of bid documents in the current lease sale by two more months. The new date is June 30, 2015.  The Fifth Licencing Round kicked off in October 2014 with 15 tracts on offer, covering a total of 76,800km2 of acreage. Initial deadline for bid was 20th of January 2015.
Three out of the 15 (R5-A, R5-B and R5-C) are located in the northern Rovuma basin, in the proximity of the Areas 1 and 4, where the U.S independent Anadarko and Italian major ENI made their large gas discoveries, now under development. Two blocks – A5-A and A5-B are in the Angoche Basin, off the country’s northern province of Nampula. This offshore basin is largely unexplored. Six blocks are in the central Zambezi area: Z-5-A, Z5-B, Z5-C, Z5-D, Z5-E and Z5-F. This offshore zone was the focus of exploration in the 90s, more than a decade before the discoveries in the Rovuma kicked in.

The remaining four blocks in the round are located onshore around the Pande-Temane concession and Palmeira. Shortlisted companies will eventually be invited for E&P concession agreement (EPCC) discussions, followed by eventual awards. The postponement has been to ensure that there are enough bids to make things competitive.

The terms have been certainly less favourable than the last bid round. In the just promulgated petroleum law, the authorities have set a royalty rate of 10% on oil and 6% on gas, but these rates will be reduced by half for domestic market obligation output. The government’s responses to several questions raised around the bid round are published herewith.

The truth is that Mozambique is not the unknown quantity it was a decade ago; it now sits on an estimated 100Trillion cubic feet of gas reserves. Following the submissions of all bid documents by June 30, 2015, contract negotiations will proceed with the signing of contracts expected thereafter.