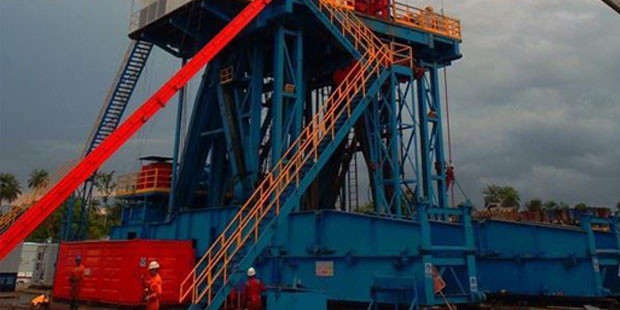 By the end of March 2015, Hilong -27, was the only Chinese owned and constructed rig active in Nigeria, out of seven such rigs on duty exactly a year to that date. Hilong -27 is a special rig: the High Pressure High Temperature (HPHT) equipment has been slightly more than a year on duty on Gbaran-26, Shell’s deep, high pressure test in the south central Niger Delta.
The Nigerian rig count itself, in March, had plunged from 39 in March 2014 to 23 in March 2015.
Seven rigs from China out of a count of 39 is a high number, considering the diversity in the country. There were rigs by Pacific Drilling, British Oil and Gas Exploration Limited (BOGEL) Durga, Shelf Drilling, KC Deutag, Saipem, Cardinal Drilling, as well as Oando’s and Seawolf’s.

From China, HPEB-119 and HPEB-120, owned by Henan Petroleum Company, were on Samabiri-12 and Ole-3 for Italian major ENI (known as Agip in Nigeria). HCN -187 (owned by the same company) was working on Sahara Petroleum’s Oki field. Shell Nigeria was the major patron of the Chinese rigs in that period. HPEB-129 was on Okpokunou 5X. Hilong-2, Hilong-19 and Hilong-27, all owned by Hilong Oil Service were active on Koroama 8, Koroama-9 and Gbaran deep respectively. The last rig is the last one standing.

The rest are out of duty, largely due to challenges of payment of cash call arrears by the state hydrocarbon company NNPC, to its joint venture partners.