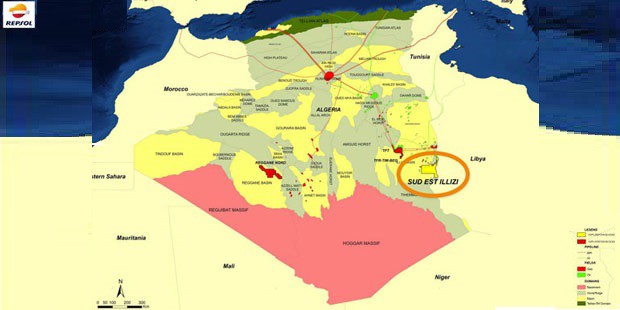 Mohammed Jetutu, in Cairo
Spanish explorer Repsol flowed 6.1Million standard cubic feet of gas per day in a reservoir in Teso-2, the first well of a 2015 drilling campaign in Illizi Basin in southeast Algeria. The TESO-2 well was drilled to a depth of 1,307 meters in the Ordovician reservoir in the country’s.The 2015 drilling/exploration campaign, started in January 2015, is Repsol &Co’s second exploration programme on the licence.  Repsol is 52% operator of the Sudest Illizi licence, with partners including Enel Spa    (27.5 %) and GDFSuez (20%). SONATRACH will participate with a 51% stake in the development and production phases.

Four additional appraisal wells make up the rest of the second programme. Two discoveries had been made during the first exploration phase in 2012 and 2013 respectively with the TIHS-1 and TDE-1 wells.