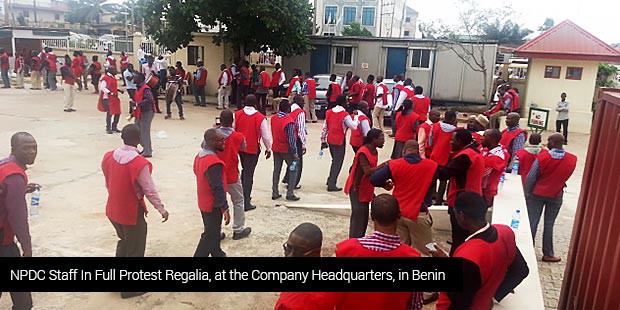 The largest branch of the oil industry employees union has joined the strike to reverse the Nigerian Government’s granting of operatorship of Oil Mining Leases (OMLs) 40 and 42 to Elcrest and Neconde respectively.

The solidarity action by NNPC staff has raised the temperature of the conflict. PENGASSAN and NUPENG members from all the NNPC business units, including the Products and Pipelines Marketing Company (PPMC), the three refinery companies, the  Integrated Data Services Limited (IDSL), the National Engineering and Technical Company Limited (NETCO) and  the Nigerian Gas Company have all signed on for the strike.

“It has taken us all by surprise”, said a manager at NAPIMS, the investment arm of the NNPC, in Lagos. “We just knew about the action around 4pm Tuesday, May 19”.

NPDC staff had shut in most of the oil fields in four acreages: OMLs 40, 42, 30, 34 and 26, as they began full scale strike action Friday, May 15, 2015.  The staff shut in the flowstation at Batan in OML 42, but the Odidi field on the same acreage is in production. The strikers also shut in production of all oil fields in OML 30 (around 32,000BOPD), OML 40 (about 3,000BOPD) and OML 26 (~6,000BOPD). They were unable to shut in the Utorogu field in OML 34, because the staff of Lee Engineering, the contractor running the Utorogu station, said they were not part of the strike. However, crude oil produced in that acreage cannot be evacuated because it is pumped through the Afiesere field in OML 30, which the strikers shut in.

In effect, just as Shell was reporting the resumption of operation on the Trans Forcados Pipeline after about six weeks of disruption, some of the fields that pump through this line have been shut in.

Neconde and Elcrest, who are Nigerian independents, purchased 45% stakes in OMLs 42 and 40 respectively from Shell, TOTAL and ENI in 2012, but the operatorship of the assets were not granted with the purchases. The government company NNPC instead invoked its rights to operatorship of the assets, and assigned those rights to NPDC, its subsidiary. For most of the last three years, Neconde and Elcrest, along with First Hydrocarbon Limited, Shoreline Resources and NDWestern, who bought similar stakes in OMLs 26, 30 and 34 between 2011 and 2012, have lamented NPDC’s lack of capacity to continue as the operator of the acreages they purchased from the Shell-led consortium.

Their argument is that they could have gotten more production out of the fields than NPDC was doing as operator. The government appears to have finally agreed with them and the perception in the industry is that the remaining three companies will soon have their prayers for operatorship answered. The employees union, however, says the operatorship change would affect the jobs of its members.