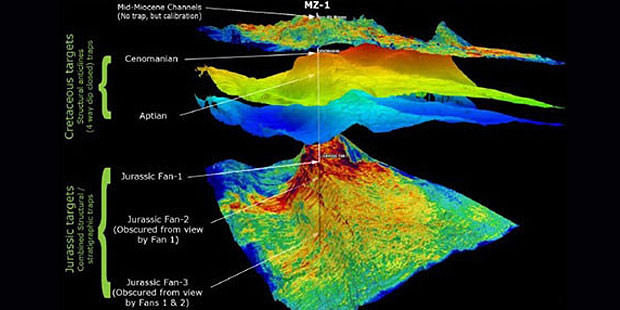 Australian independent Pura Vida Energy is drilling ahead the MZ-1 well in the Mazagan Permit, offshore Morocco. The hole is being made with the deepwater drillship Atwood Achiever. Drilling is expected to take approximately two to three months.
“The well is ideally positioned at a location where a single well can test multiple stacked targets in each of the Cretaceous and Jurassic levels”, Pura Vida says in a statement. “MZ-1 is expected to test four, and potentially five, independently risked, stacked prospects at an optimal location increasing the overall chance of success”.

The Jurassic fans are interbedded within the expected source rocks of the basin and thus they are ideally positioned to receive migrating hydrocarbons directly from the source rocks into the fan systems and carrier beds. In the event that the fan systems are not effective traps, then migrant hydrocarbons are likely to pass vertically up into the younger Cretaceous structural anticlinal traps.

MZ-1 will also penetrate the shallower Mid-Miocene turbidite channel fairway providing information on the Tertiary play that is expected to provide useful data in determining the second well in the drilling campaign.

The well is expected to drill to 5,600 metres Measured Depth(MD), in water depth of 2,176 metres. There’s potential to deepen the hole, a straight hole, by 650 metres to 6,150 metres (MD). The Atwood Achiever is a dynamically positioned ultra-deepwater drillship capable of operating in water depths of 3,658 metres and drilling to depths of 12,200 metres.

A full suite of Logging Whilst Drilling (LWD) and wireline logs are planned to be run over the course of the MZ-1 well in both success and failure case scenarios to maximise the learnings for all future exploration. Planned logs include gamma ray, resistivity, porosity and density sonic measurements which provide the basis for fundamental rock evaluation.

Drill cuttings, mud gasses and mud samples are planned to be recorded and analysed immediately after installation of the blowout preventer and down to the final total depth of the well. A fluid sampling and pressure measurement program are expected to be conducted to determine formation fluids and pressures followed by rotary side wall cores for sampling rocks at specific intervals for both reservoir and non-reservoir properties.