Shell and ExxonMobil Tie up as Nigeria’s Top Operators 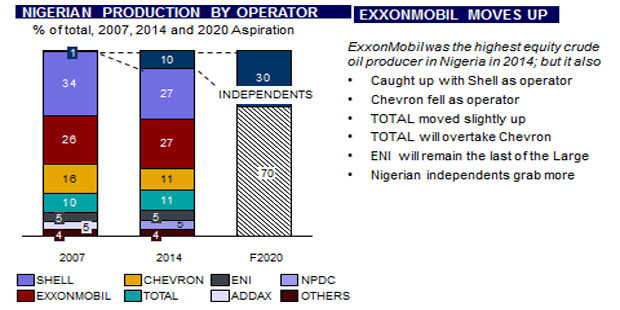 ExxonMobil’s not just the largest equity crude producer in Nigeria; it has moved to tie up with Shell in operated production. This is official; the data was shared by Victor Adeniran, Group Executive Director of Commercial and Investment Division in the state hydrocarbon company, NNPC, at a conference of petroleum  geologists in Lagos recently.

Chevron’s contribution as an operator fell from 16% to 11%, just as TOTAL inched up by one percentage point, to11%.

Italian giant ENI brings up the rear of the majors in Nigeria, as an operator.

The data projects that Nigerian independents share of operatorship will treble by 2020, to 30%.

Still, a company’s share of operatorship does not translate to actual share of equity production, which is the real value, as it is determines the volume of crude oil it is entitled to lift. Last April, this website reported that ExxonMobil’s net crude oil output in Nigeria in 2014 averaged 298,000BOPD, the highest liquid hydrocarbon volume credited to a single company in the country. Chevron came second with 240,000BOPD, more than half of which was delivered by a single oil field: Agbami.

Shell’s Nigerian crude oil production, at 191,000BOPD net, was the third largest daily crude oil output by any major company. TOTAL is the fourth at 156, 164BOPD. The figures are all from the companies’ just released annual reports.  These figures exclude natural gas production.

« SDX Is Stuck At Below 1,000BOEPD
Guarantee Gets Approval To Drill Ororo-2A »