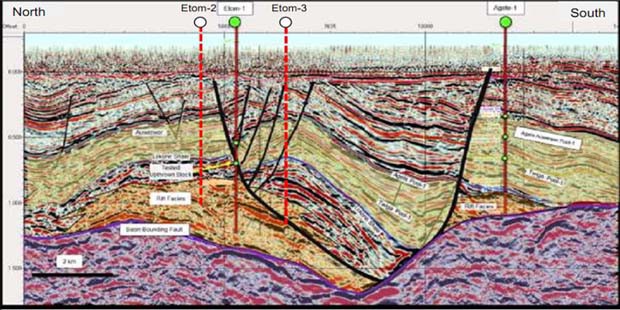 By Sully Manope, in Nairobi

Etom 2’s the most northerly well in South Lokichar.. opens a new fairway

Irish independent Tullow Oil says the 102 Metre net pay in two columns it encountered in Etom 2, “confirms a new potential exploration fairway in the northern portion of the Lokichar Basin”.

The well was consequent on the interpretation of a 247 km2 three dimensional (3D) seismic data acquired over the Etom area (Block 13ST) earlier in 2015; Etom-2 was not even a part of the proposed 2015 drilling set out in late 2014. But the new data identified the prospect on the north flank of the Etom structure in an untested fault block

In the event, the stars are all aligned for this new find:  “Oil samples, sidewall cores and wire line logging all indicate the presence of high API oil in the best quality reservoir encountered in the South Lokichar Basin to date,” the company explains. Tullow says additional prospectivity identified on the 3D seismic in the Etom Field area and in the northern portion of the basin, including the Erut and Elim prospects, will now be considered as part of the future exploration drilling programme.

“Discovering this thick interval of high quality oil reservoirs further underpins the development options and resource base. The result demonstrates how we have improved our understanding of the South Lokichar Basin,” says Angus McCoss, Tullow Oil’s Exploration Director.

“This discovery confirms a new potential exploration fairway in the northern portion of the Lokichar Basin.  This result also suggests significant potential in this under explored part of the block as it is the most northerly well drilled in South Lokichar and is located close to the axis of the basin away from the basin-bounding fault.

The PR Marriott Rig-46 drilled the Etom-2 well to a final depth of 1,655 metres and will now move to Block 12A where it will spud the Cheptuket-1 well around year end, the first well to be drilled in the Kerio Valley Basin.