Not a very Productive Year for Pan Ocean 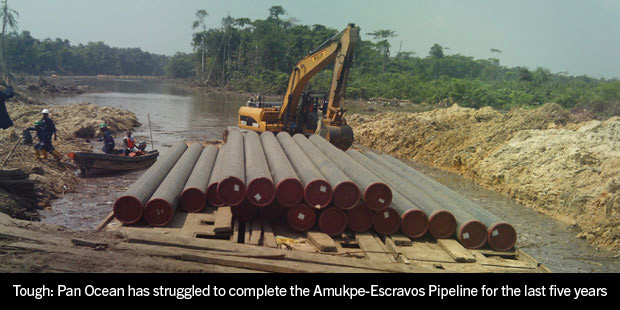 2015 wasn’t exactly Pan Ocean’s most productive year, in terms of crude oil output. The Nigerian independent produced as low as 17,720 Barrels of oil for the entire month of April 2015 (or 591BOPD). Between January 1 and October 31, 2015, its best month was July 2015, when it output a total of 205,186 Barrels (or 6,619BOPD), according to the November 2015 edition of the NNNPC monthly financial report, which includes production data of all the companies operating in Nigeria.

NNPC did say that this data was fiscalised, meaning that this is the volume of crude that was attributed to the company, after all the discounting (including pipeline losses and other calculations). The fact that 6,619BOPD gross (meaning 2,647BOPD net to Pan Ocean), was the highest monthly average for the company, for most of 2015, is instructive; Pan Ocean has operated in Nigeria since 1973 and for over a decade was the only indigenous company in the prestigious joint venture club with NNPC. Yet its current production profile suggests that it produces less-even on gross basis- than several marginal field producers in the country.

« What Can Go Right In 2016?
Africa’s Exploration Boom is Overrated »