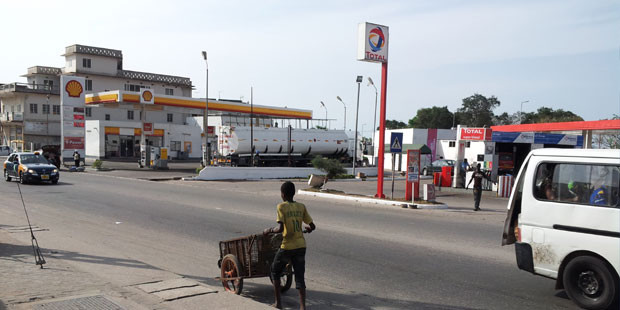 Most gas supplied in Ghana have flowed to the Takoradi (Western region) Power cluster; now electricity projects in Tema in the east can be sure of supply..

Ghana’s state hydrocarbon company has signed an agreement aimed at importing Liquefied Natural Gas (LNG) beginning from the end of 2016. The ‘Tema LNG project’, so named because it will be located in the port town

The project will be delivered by Quantum Power, a pan-African energy infrastructure investment platform, with which GNPC has signed Heads of Terms.

Most gas distributed in Ghana, either from import (West Africa Gas Pipeline) or produced in the country (Jubilee field) go directly into the power cluster in Takoradi and environs in the west of the country, whereas electricity projects in Tema in the east are gas starved.

The government targets 5,000MW of electricity, which is about doubling the current output, by 2017. The country has ordered two thermal generating barges with total capacity of 450MW, from Turkey.And ongoing gas-fired power plant projects include a 360MW capacity plant that is additional to the current 200MW capacity at the Chinese owned Sunon Asogli plant, 230MW thermal plant at Kpone, near Tema and a new  plant being built by TAQA, Abu Dhabi’s National Energy Company, to increase an existing plant by 110MW, all grossing 1,110MW on top of the exiting 1,245MW. When these are completed between 2016 and 2017 they will collectively require total gas volume of at least 300 million standard cubic feet of gas per day (300MMscf/d).  This is where the challenge is: what is currently imported and generated in country is not up to 200MMscf/d.

Of the Tema LNG Project, the GNPC says: “An associated sub-sea and onshore pipeline will deliver the natural gas to GNPC and its customers onshore. The project, comprising a capital outlay of over $550Million, will be implemented on a build-own-operate-transfer (BOOT) basis with the assets transferring to GNPC after the Project’s 20-year term”.

As the Ghana’s national gas sector aggregator, “GNPC is leading Ghana’s efforts to develop the gas-to-power value chain supporting the Government’s vision of energy security for accelerated economic growth”, say Alex Mould, GNPC’s Managing Director. “The Tema LNG Project is a critical component in achieving this vision as it allows for the diversification of fuel supply sources, enhancing flexibility and reliability.  It guarantees GNPC contracted capacity of 250 million standard cubic feet of gas per day, for regasification of competitively priced LNG.” 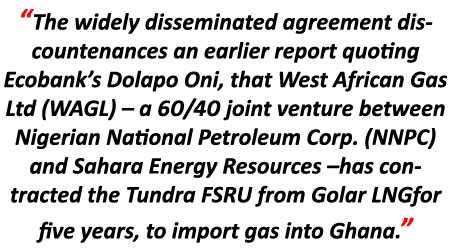 Commencement of operations is scheduled for the end of 2016 and, given its design, the Tema LNG Project has a built-in scalability, which would make it play an increasing role in meeting Ghana’s growing energy demand; providing the Ghanaian power generation industry with a highly reliable and clean fuel supply to meet projected power and industrial needs over the next 20 years.  The Tema LNG Project will provide GNPC with the flexibility to manage volatility in power demand and fluctuations in domestic gas supply, while mitigating the effect of unpredictable rainfall on Ghana’s power balance.

The Tema LNG Project has been under development for three years, involving some of the world’s most experienced engineering teams collaborating on an innovative design to address the specific maritime challenges in the Gulf of Guinea, while assuring optimal year round operability.  The terminal, which will be located 12 kilometres off Tema’s shore allows for cost efficient refuelling and regasification without affecting maritime and port traffic.