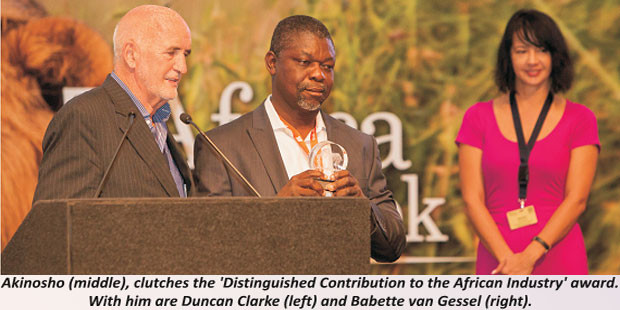 By Sully Manope, in Cape Town
Toyin Akinosho, Publisher of Africa Oil+Gas Report, received the top award of the latest edition of the “Big Five Awards” conferred on distinguished oil industry players at the annual Africa Oil Week in Cape Town.
The one week conference is the most prestigious gathering of operators and regulatory authorities on the continent.

The awards are named after the big five game animals of the African Jungle; as oil exploration is often described as hunting for game. The term big five game was coined by big-game hunters and refers to the five most difficult animals in Africa to hunt on foot. They are the African lion, African elephant, Cape buffalo, African leopard, and White/Black rhinoceros.

On the 18th anniversary of the awards, Duncan Clarke, Chairman and CEO of Global Pacific & Partners, organisers of the 22 year old conference, announced the 2015 winners for their contribution to excellence in Africa’s petroleum industry. The winners included:

(1) Distinguished Contribution To The African Industry
Toyin Akinosho, Publisher, Africa Oil+Gas Report
The Elephant is the largest living land animal and Africa’s true King of the Savannah. Toyin Akinosho has over 27 years of oil industry experience, 20 of them spent as petroleum geologist with wide and increasingly diverse experience in Chevron, where he retired in 2008. He publishes the widely read Africa Oil+Gas Report, which has shown uncommon courage and candour in its coverage of the industry. Toyin has demonstrated keen interpretation of issues and trends in the technology, fiscal and strategic aspects of the oil industry, leading his magazine to establish rankings of top independent foreign and local producers and spotting the emergence of African indigenous independents. This award is particularly granted for his having the courage of his convictions.

(2) Contribution To African Petroleum & Excellence
Mick McWalter, Advisor at Large
The Lion is a African Predator, and McWalter, with  over 35 years post graduate industry experience , has shown appetite for new oil and new ways of seeing things since he started exploration logging in Asia and the South Pacific in 1980.

(3) Independent Player In Africa 2015
Cairn Energy. The Leopard is a survivor and predator, with much skill. With its basin opening discovery in largely underrated Senegal in 2014 and an aggressive follow up, Cairn is clearly the lead hunter in the African wild. At a time that the continent’s discovery is either large gas finds in deep waters or oil in thousands of kilometres to the coast, the London listed player has delivered a major oil discovery offshore.

(4) African National Oil Company 2015
GEPetrol, the state hydrocarbon company of Equatorial Guinea has acted like a Rhino, solid and commanding and tenacious. In a tough year, it has continued with the work of ensuring that the small Island nation remains one of the top hydrocarbon producers in a continent booming with new discoveries.

(5) Service & Supply 2015
MGGS BV(Mark Guillon, Director/Owner)
Mark Guillon, founder of the Marine Geological and Geophysical Services BV,  has, like the Buffalo been tough and persistent.

Outside of the Big Five and the Legend Award, the African Institute of Petroleum gave the 7th Annual Conrad Gerber Award for research and intellectual contribution to Africa to Requier Wait of KPMG, in recognition for the development a structure to evaluate petroleum fiscal systems in Africa; Global Women Petroleum &Energy Club conferred the Woman in Africa Award, 2015to Dianne Sutherland, owner, publisher and Chief Editor, Petroleum Africa. The PetroAfricanus Club awarded the Chief Executive of Styx Energy its Lifetime Achievement Award. His name was not included on the reference material.

….Meanwhile, Peter Dolan is the Legend

Peter is the third recipient of the Africa Oil Legend award which is presented to those who have been involved in, and supported, the E & P sector throughout Africa: in Peter’s case it has been for over 40 years.
Separately, Peter was the guest speaker at the 71st PetroAfricanus Club dinner in Cape Town where his subject was “Africa’s Independents: 50 Years and Counting”.