Notes of a Conference Rat 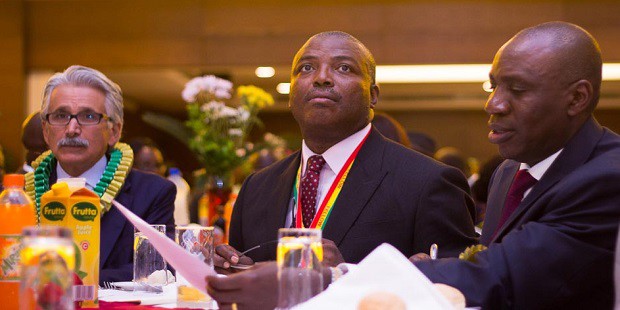 Hydrocarbon themed confabs are a growth market in Africa

I was taking the short walk back from the Convention Centre to my Hotel when I ran into Adewale Fayemi, Country Manager of TOTAL E&P in Uganda.

“I saw you grilling the Permanent Secretary a while ago”, he observed, after we exchanged greetings.

“I was curious about the pipeline route from Uganda’s oil fields to the market”, I explained, “but I couldn’t elicit a specific answer”.

I couldn’t help feeling spooked at the chance encounter with Fayemi, at that point. In one breadth I was asking the top bureaucrat at the Ugandan Energy Ministry about the single most important decision in the export of crude oil from his landlocked country. In the next I was talking to the Chief Executive of the local subsidiary of the only oil major operating in Uganda.  And just hours before, I had met briefly with Fayemi’s colleague; Philipe Montagnier, TOTAL’s Vice President Exploration Africa, who told me the company would return to drilling offshore South Africa in 2016, but at a much later date than earlier announced.

These are the sort of interactions that make the Africa Oil Week AOW in Cape Town, South Africa, a must, in my yearly calendar of activities.

I’m an oil and gas journalist for whom access is important. And this particular gabfest facilitates the access, in as informal a way as possible, than many of the talk shops popping up all over the continent.

At the AOW, I have held the gaze of Piero Scaroni, the legendary former CEO of ENI, Italy’s largest company, and asked him pointedly: ‘If you were running Tullow Oil, would you build a small refinery in Uganda?’  I have pushed for answers from Ebie Haan, who was Chief Executive of Sasol Petroleum International, on the likely date of first oil from Mozambique. And with just a handshake with someone I’d rather not name, I knew for certain that the Shell/ENI held deepwater fields Etan-Zaba Zaba, offshore Nigeria, would not get an investment sanction, even in 2016.

People attend conferences for different reasons. Conference organisers offer “networking”, which really translates to “access to decision makers” as a key value proposition. Hydrocarbon themed confabs focused on Africa have grown in leaps and bounds. In the last five years, the growth trajectory has been higher in East Africa, where there have been much more extraordinary exploration successes than in the west and north of the continent.

A significant part of AOW’s drawing power is the series of experiential activities providing intimate encounters evening after exciting evening through the five days. The conference takes full advantage of the extraordinary beauty and scenery of Cape Town, the Tourism capital of the continent. There are fulsome cocktails with splendid views of the Atlantic Ocean. There are after- hour congregations at historic leisure haunts. There are lunches on the beach. I will share an experience shortly. But first, a brief background about me and confabs.

My earliest involvement in conference organization was in 1988, as Publicity Secretary of the Nigerian Association of Petroleum Explorationists (NAPE). In 1990, I initiated the process that led to NAPE’s affiliation with the American Association of Petroleum Geologists, (AAPG), the largest association of geoscientists on the planet. Back home, NAPE’s own 37 year old annual meeting constitutes the largest gathering of strictly technical professionals in Nigeria.

In 1995, I was invited to be part of the foundation planning for the birthing of Offshore West Africa OWA, which has moved from Libreville in Gabon, through Accra in Ghana and Abidjan in Cote D’Ivoire to Abuja, in Nigeria and Windhoek in Namibia, perhaps the most mobile feast of its kind. OWA has for 20 years aspired to stamp itself as the sub regional meeting point of oil and gas executives.

The annual African section meeting of the Petroleum Exploration Society of Great Britain (PESGB), which alternates between Houston, the global headquarters of the hydrocarbon industry and London, the UK’s capital city and financial hub, offers some of the most detailed overview on the current thinking on the diverse petroleum systems of the African continent.

The Nigerian Oil and Gas (NOG)conference in Abuja, is the largest in the country, and one of the biggest on the continent, mainly because it guarantees the presence of  the minister and all  his/her men. It also features the entire hydrocarbon chain; from upstream through logistics to refining.

Every May, thousands of petroleum engineers, energy bureaucrats, oil and gas lawyers and businessmen descend on Houston for the Offshore Technical Conference (OTC). It’s a huge meeting ground for oilfield equipment makers and suppliers. The spirited networking opportunity thrown up by the diversity of the congregation has produced a lot of profitable partnerships. The joke often makes the round that you were likelier to extract the consent -of any deal-from the Nigerian Minister of Petroleum during the OTC in Houston, 10,700kilometres and 13hours by flight from the closest Nigerian airport, than you do by visiting the Ministry’s Abuja office.

For all its credentials however, I am far less enthused about attending OTC than I am about Africa Oil Week. I am much more focused on E&P companies, who decide that projects will happen, than contractors, whose jobs depend on those projects. I am keen on getting the various perspectives on the hot button issues around the continent in one shop.

The journalist’s notes are filled with the minutiae of details from the investment banker, the reservoir engineer, the oil and gas lawyer and the operations geologist. Admittedly, a clue about Baker Hughes’ current research on field optimization provides great insight into the future of Shale oil, but it is from the Chief Executives and top officials of independents and majors operating in Africa who commission the seismic operations, pay the drillers, and approve the drainage architecture of the field, as well as from regulators, who sign off on the investment plan, that you get the one liner, or read the body language, that provide the context for the most important story.

The Africa Oil Week provides this specie of exhibition attendee than any other, for my purposes.

I happened on the Africa Oil Week, initially christened Africa Upstream conference, in October 1997, on my first visit to South Africa. I was on vacation to view the Johannesburg Biennale, an international exhibition of edgy, contemporary Visual Art.

Relatively smaller than it is now, the audience and the ambience at the IBM Imax Centre across the road from the V&A Waterfront had confirmed to me that AOW was targeted at the guy in the corner office of the hydrocarbon firm. In its 22nd year, last October, I was certain it had serviced several generations of that corner office occupier and built a community of oil men and women who look forward to the annual feast.

In between trading collegial jokes with an American journalist from Bloomberg and an Indian born reporter working out of London for Platt’s  Oilgram, I’d turned briefly to butt in on a discussion between three African lawyers: the one from Zimbabwe, the second from Namibia  and the third from Uganda. This was all at the beach luncheon to round up the last edition of AOW. Then from the corner of my eye I caught sight of Immanuel Mulunga, former Petroleum Commissioner in the Namibian Ministry of Mines and Energy, who’d just be reassigned to be Chief Executive of the state hydrocarbon company Namcor.  I went up to meet him.

This article was first published in the December 2015 edition of Africa Oil+Gas Report.