Aiteo Was Close To 80,000BOPD before the Breach 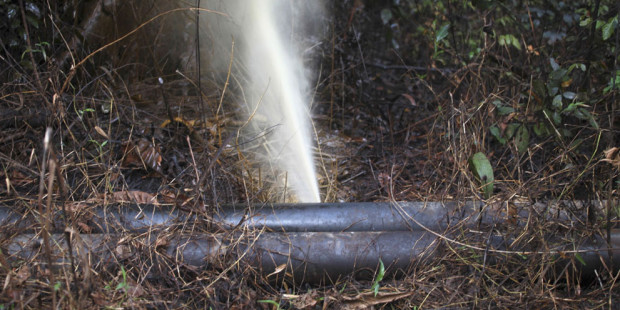 The Nigerian independent, Aiteo Eastern Exploration and Production Company, was pumping an average of 77,000BOPD in its operated Oil Mining Lease (OML) 29, in the eastern Niger Delta, before the blast on the Nembe Creek Trunkline (NCTL) that halted production on the acreage last week. It was the highest output since the company took over operatorship in September 2015. It was also the highest daily production on a single acreage at any time in history, by any Nigerian owned, indigenous E&P company. Aiteo was hoping to reach 80,000BOPD and then go to press to celebrate it. “I am determined to do a big Press splash when we reach the 80,000BOPD milestone”, Sola Omole, the company’s General Manager Public Affairs said on phone to Africa Oil+Gas Report. “What we have done is truly significant”, he gushed. “We took over this acreage at 23,000BOPD, and it’s not even a year”. Aiteo badly needs a breadth of positive news. The standard media narrative about the company consists of two prominent strands. One is that Aiteo&Co’s  45%  equity in OML 29 was purchased mostly with bank loan exceeding $1.5Billion with the expectation of crude oil sales at no less than $70 per barrel and now the company is struggling to pay back the debt as crude oil prices have dropped.  This segment of the narrative evinces Aiteo producing far below the 55,000BOPD projected for the first year from acquisition, and sold at a price around half of the worst case scenario.  The second strand of the narrative is that the company is owned by a rogue crude oil and petroleum products dealer who benefited from the sleaze of the Diezani era, for which he is, reportedly, on the run. What has been missing in the entire story telling is the effort that Aiteo, in spite of the cash crunch, has made in terms of some basic interventions in well repair and flow assurance to increase output without resort to drilling. As of January 2016, production was still less than 40,000BOPD. The surge started in February, if you read the NNPC monthly report and peaked in the second week of May, before vandals attacked the pipeline.