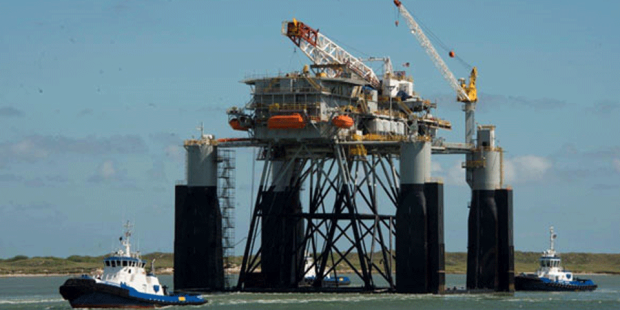 A rig contracted to drill for Conoil on the Anim Field, in the Oil Prospecting Lease (OPL) 290, accidentally fell on an ExxonMobil pipeline, causing damage which resulted in both a spill and production curtailment.

The jack up Monarch, operated by Nigerian service company Depthwize, impacted the pipeline which pumps hydrocarbon fluids from Oso condensate and Usari oil fields to the ExxonMobil terminal at Qua Iboe. The damage on the pipeline has been severe enough to cause a halt to a portion of ExxonMobil’s entire crude oil production.

The world’s largest privately owned E&P Company declared a force majeure on the Qua Iboe BFO-QUA, Nigeria’s largest export grade on Friday May 13, 2016. Udeagha says that “plans for recovery are being finalized”.The company, he adds,  is “working with our JV partner (the state hydrocarbon company NNPC) to manage potential supply impacts, and with Depthwize to remove the rig and in order to complete the damage assessment”.

Udeagha advises that “inquiries about the incident and clean-up plans should be directed to Depthwize and/or Conoil”.

Now, as a rule, Conoil doesn’t respond to media inquiries. But Ote Enaibe, Depthwize’s Director of Sales and Marketing simply responds that “the subject matter is under investigation and we will get back to you as soon as it is concluded”. He implores the media “to bear with us”.

Monarch has been on the Anim field since Anim-1 was spud in June 2015.

The outage caused by the accident adds to production challenges that have assailed Nigeria since a military style attack on the crude oil loading end of the Trans Forcados system caused the cessation of over 220,000BOPD production in the Western Niger Delta in mid February 2016. Several other attacks have been effected on oil installations since then. Around the same time that the ExxonMobil/Dethwize/Conoil incident happened, vandals strafed the Aiteo operated Nembe Creek Trunk Line(NCTL)in the east of the country, effectively shutting down over 250,000BOPD.  Global news agency Reuters claimed on May 12, 2016 that Nigeria’s oil production had fallen to 1.65 million barrels per day (BOPD)“the lowest output since 1970”, it says, citing BP StatisticalReview. Udeagha prefers to look on the bright side: “We remain committed to safety and protection of the environment as the foremost priorities in our operations”.

« Aiteo Was Close To 80,000BOPD before the Breach
Technip Wins Contract In Conflict Ridden Libya »