The Promise of Deepwater Dahomey Basin 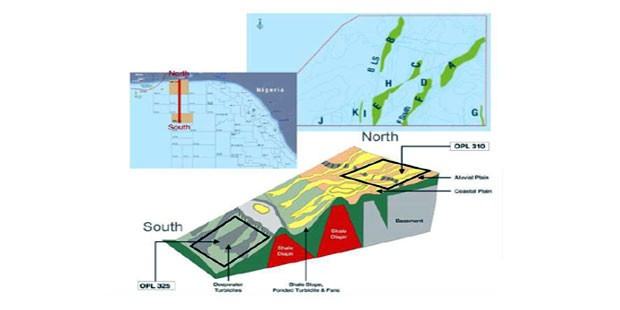 The hydrocarbon prospectivity of the Nigerian segment of the Dahomey basin has been part of the country’s geosciences debate in the last 40 years.

But the actual exploration of the frontier itself has not received the focused attention it deserves, not even with vigorous wildcatting, discoveries and appraisals in neighbouring deep-water Ghana and Cote d’Ivoire, considered part of the same cretaceous transform margin to which the basin belongs.

In the last three years however, several actions, championed by the duo of Lekoil and Afren (the latter now in administration), have fueled renewed interest in the basin.

One is Afren* led development of the oil rim in the Aje field, in Oil Mining Lease (OML) 113, in the basin’s shallow waters. When it came on stream in May 2016,Aje was the first commercial production in Nigeria’s segment of the Dahomey basin, and the first oil in the country to be produced outside of the Niger Delta.

Two is the discovery of the Ogo field in June 2013 and the subsequent sidetrack, which led to indications of probable and possible gross recoverable resources between 744 and 1,180 MMBOE (Million barrels of oil equivalent), which is significantly higher than pre-drill estimates.

A planned appraisal well was not drilled but the partners went ahead to acquire additional three dimensional (3D) seismic data to identify additional prospects in the block.

The third is Lekoil’s October 2015 purchase of the controlling equity in Ashbert, holder of oil prospecting lease (OPL) 325, as well as the company’s December 2015 acquisition of Afren’s Interest in OPL 310, consolidating its own participating Interest to 40%.

The Ogo field discovery, situated in the shallow part of a block located between 20 and 1,500metre water depth, instigated Lekoil’s further interest, downslope in deep-water Dahomey basin. Between January 2014 and October 2015, Lekoil commissioned a basin study and identified promising plays and fairways. The company evaluated assets and engaged four licence owners in the basin.

Still, Lekoil’s choice of OPL 325 has provoked animated private conversation among geoscientists around the oil potentials of deep-water Dahomey basin. “We haven’t actually taken a good overview of this particular basin, let alone work through its deep-water segment,” argues Ebi Omatsola former Chief Geologist at Shell Nigeria and Africa’s leading exploration thinker. “All I would tell them is: go for it. There’s a lot that technology and new thinking can do”.
Dr. Omatsola would not provide more than these encouraging comments and other geoscientists who spoke, did so on condition of anonymity.

The transform margin is a narrow margin, as evidenced from the steep

slope from the shelf to the deep-water. It takes a very short distance to get from shallow water to deep-water. Most of the material that comes into the margin is rapidly dumped into the ultra-deep-water via the steep slope. “The margin itself can be broken into strips”, says one respected geoscience scholar and noted regional geologist. “If you are exploring the shelf part of the basin, its best for you to focus on where the original graben (what Omatsola calls the basin’s DNA) is located. This will hold the original sedimentary sequence and the source material will be basin ward of this, so the more up dip you go, the reservoir is likely poorer”.

Looking for the original graben means a very integrated study, but seismic interpretation helps a lot because it provides the geometric visuals.

“If your interest is in ultra-deep-water Dahomey Basin, what will be holding the oil would be turbidites”, the renowned scholar explains, “but again you need to pay attention to the geometry; just because you come on a turbidite fill doesn’t wholesomely guarantee a hydrocarbon find”.

Several geoscientists interviewed are quite skeptical of the size of the prize in any block in deep-water Dahomey basin. “It has a very small fetch area”, explains one former Shell explorer who now runs a marginal field company, referring to the size of the drainage area from which the hydrocarbon would be expected to migrate to the trap.

More than any group of geoscientists, Chevron’s geologists were privy to much of the available data in the West African transform margin, extending from Liberia in the west, to Nigeria in the east. The company was the technical operator of the OML 113, the block hosting the Aje Field, from which it divested in 2011. Chevron’s geologists are, however, mum about what they know.

Interest in deep-water Dahomey basin in Nigeria has suffered majorly from four handicaps: one is the example of the efforts in shallower water Dahomey Basin in the neighbouring Republic of Dahomey, where exploration, appraisal and development of reservoirs have had a lackluster history, in contrast with the fortunes of the Niger Delta in Nigeria. The second is that there hasn’t been significant successes in the chronologically equivalent basins in Cote D’Ivoire, Togo and even Ghana’s Keta basin.

Thirdly, the acreages in deep-water Dahomey basin in Nigeria have largely been held for several decades by risk -averse Nigerian companies who sit on them and see them as items of rent. The fourth challenge is that many of the Dahomey basin acreages sit on the outer toe thrust belt (OTT) of deep-water Nigeria, which has proven quite problematic in terms of structuration for holding hydrocarbon. Onigun-1 by Phillips (OPL 318) and Erinmi-1 by Petrobras (OPL 324) are two of the five dry holes in the OTT.

It’s not so clear that Lekoil itself will move a rig to the OPL 325 anytime soon, given the low price challenges and the trouble it is having with bringing the Otakikpo marginal field to commercial production. It is also not likely to go for appraisal of the Ogo field in 2016. Still, if anything, this AIM listed minnow’s purchase of equity in OPLs 310 and 325, almost back to back, has helped rejuvenate the discussion around the potential of deepwater Dahomey basin.

This piece was initially published in the January 2016 edition of the Africa Oil+Gas Report.  *First Hydrocarbon Nigeria Limited (FHN), was a subsidiary of Afren (now in administration) when it joined the consortium of companies in OML 113 with 9% participating interest in 2011. It paid $34MM for this interest to Chevron and its involvement hastened the field development plan for the asset.

« In West Africa, The Atlantic Loses Its Sparkle
TOTAL Shoots Towards >400,000BOPD in Angola’s Block 17 »