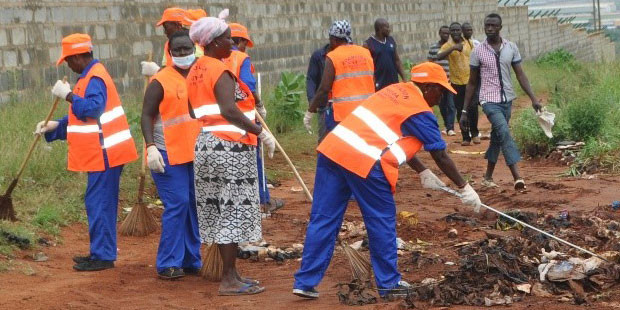 Sprawling right behind the walls of the West African Gas Pipeline Company’s (WAPCo) Tema Regulating and Metering (R&M) Station, in the east of Accra, Ghana, is a settlement known as Bankuman.This unplanned community, made up largely of temporary structures as shelter, though not directly on WAPCo property has become a source of major concern. Aside the occasional incursion onto the pipeline right-of-way by constructing unauthorized structures, community members frequently use the right-of-way as thoroughfare and indiscriminately litter the environment. Mounts of stinking refuse, including human excreta, have resulted in insanitary conditions that threatens the health and well being of this community.

In addition, various unsafe activities by the community members, including the setting of fires on and close to the Right-of-Way and the R&M facility, pose a serious threat to the safety of the pipeline.

WAPCo has undertaken a number of activities to address the situation in order to avert any crisis. The most recent being the donation of three large skips to the community as well as collaborating with the traditional authorities, Zoomlion and the local government leadership in the community to clean up the area.

The General Manager Corporate Affairs, Mrs. Harriet Wereko-Brobby in making reference to the donation, said WAPCo does not seek to endorse the ongoing building of structures on and along the pipeline right-of-way on land earmarked for industrial development but rather to protect the environment and the pipeline. She drew attention to the risk of having such developments within close proximity of the pipeline, and also the health consequences of such indiscriminate disposal of rubbish around the facility and along the pipeline right-of-way. She particularly expressed concern that the onset of the rains could lead to epidemics if the insanitary activities were not stopped.

Mrs. Wereko-Brobby explained that WAPCo’s donation is with the hope that the Bankuman residents will use the waste containers and stop the indiscriminate littering. She further stated that WAPCo has handed over the skips to the District Assembly and the traditional leaders with the expectation that they will make suitable arrangements for them to be emptied frequently and regularly. WAPCo is also constructing a toilet for the community with the expectation that the deposit of human excreta around the company’s facility will stop.

The Paramount Chief of Tema Traditional Area, Nii Adjei Krakue II, who was present at the event, expressed surprise at the developments around the facility and along right-of-way, and pledged his support by discouraging developers from building close to the right-of-way.
The Assemblyman for the Bankuman Electoral Area, John Djorgodje commended WAPCo for its contributions towards the community and assured WAPCo of their preparedness to take responsibility for the skips and ensure cleanliness in the area.

« WAGP Output in March 2016 Was The Lowest
Egypt Shines Through the Dark, Low Price Era »