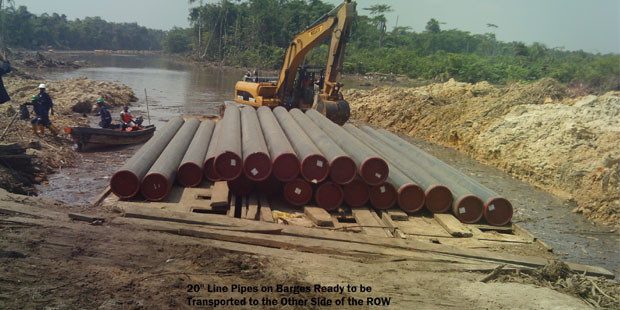 Long term security of installations in Nigeria’s oil rich Niger Delta region depends on who wins in the battle of wits between President Muhammadu Buhari and the so-called Niger Delta Militants, whose leaders are essentially from the Ijaw nation, the country’s fourth most populated ethnic group.

Is President Buhari prepared to stare down the “militants” and wear them out while their actions continue to cripple the continent’s largest economy? Or does he bow to pressure and go to the negotiating table, begging them to stop?
Armed gangs have been destroying Nigerian crude oil evacuation infrastructure at an unrelenting pace since February 2016, gaining media attention and de-branding the Nigerian corporate image in the process. President Buhari’s ineffective public communication notwithstanding, it was obvious, until the weekend of May 30, 2016, that he had chosen the military option to deal with the crisis, which has cut the country’s crude oil production by 40%.

Now talk of the government’s call for the military to stand down while “negotiations” take place is worrying.
The Nigerian state bowed to pressure from sympathizers of avariant of these “militants” seven years ago and granted amnesty to those who had picked up arms to destroy facilities and kill Nigerian soldiers. The government then awarded millions of dollars of contracts to leaders of these militias, to secure the installations. Even so, routine pipeline vandalism continued unabated. The Trans Forcados system, (comprising a crude oil pipeline, a crude oil loading line and the Production Terminal), was down for over 30 days in 2015, right in the  Goodluck Jonathan era.
The 97 km Nembe Creek Trunk Line, which was commissioned less than six years ago, was repeatedly down due to vandalism all through the Jonathan years. So was the Trans Niger Pipelline. These were all at the time that “Pipeline Surveillance” Contracts to Militant Leaders were subsisting.

Things ratcheted up, however, as soon as the Buhari government moved to stop the contracts and investigate abuse of the process, armed gangs again started bombing installations.

We believe there are two things at work here:

(1), the return to brigandage by so called militants is a continuation of the election process. A few days to the March 2015 elections, during which Buhari beat the incumbent President Goodluck Jonathan, who hails from the Niger Delta, a number of the region’s top politicianshad vowed to make the country ungovernable if he lost. Jonathan’s historic acceptance of Buhari’s victory temporarily dissuaded them.
The Niger Delta region hosts a large number of incorruptible, hardworking, and well-meaning people, but a few influential members of Nigeria’s rapacious rentier elite, with roots in the region, have felt pushed to the wall by the investigations into corrupt practices that the Buhari government has promoted since he came to power.
(2) “If they’d get Tompolo they will get to us”. Niger Delta Avengers, who have claimed responsibility for most of the attacks, have stridently claimed their actions have nothing to do with sympathy for Mr. Government Ekpemupolo, alias Tompolo, a key beneficiary of the surveillance contracts who is being sought by the anti-corruption agency Economic and Financial Crimes Commission (EFCC).

If you’ve covered the Nigerian oil industry closely as we’ve done all these last 15 years, you’re likely to be persuaded that the Avengers’ actions are desperate attempts to stop the EFCC from pursuing Tompolo and several leaders of the Niger Delta allegedly caught up in corrupt transactions in the last administration. This view is contrary to the media’s widely reported claim by Tompolo that he distances himself from the exploits of the Avengers.Media reports that Governors of the Niger Delta region who on May 31, 2016,met with the Nigerian Vice President Yemi Osinbajo at the State House “called for the majority of corruption cases in the region to be dropped by the Economic and Financial Crimes Commission (EFCC)”, tallies with what Africa Oil+Gas Report has strongly suspected all along.

The point is that corrupt persons who claim to be leaders of the Niger Delta are not working in the interest of the Niger Delta.
How can elected Governors be pushing for armed insurrection because of investigations into corrupt practices? Who’s there to look out for the small guy, whose children cannot go to school because some people with access have looted the funds with which the teachers were supposed to be paid?

How can few individuals be so invincible, because they can play with a few million dollars, sponsoring attacks to stop the state apparatus on a quest for justice and taking advantage of our collective predilection for emotional responses to grave challenges?
The wealth of the beneficiaries of the last regime of heightened attacks on oil facilities (2006-2009), has not trickled down into improving the livelihood of the teeming masses of the region.

Nigeria does not have to conduct its National Conference under the threat of grenade.

This particular issue offers the nation a singular opportunity to build the intelligence of the police, the only security agency with offices in the nooks and crannies of the country. The government has more money in its arsenal to create a functional police force that stops criminality before it happens, than these criminal minded leaders have in waging pipeline bomb wars.  These militants who don’t have our interest, are not fighting a spiritual warfare; they are materialists. Let us agree that oil money may not flow in for a while and stare them down. The world will not collapse.
The country’s security agencies themselves need to rethink their attitude to engaging people taking arms against the state and destroying property. Their preference to “put men and guns” to respond to security threats after the fact is a significant part of the challenge of securing the country.
Whether they are tackling armed robbery in the southeast, or fighting Boko Haram in the Northeast, the Nigerian security apparatus would rather engage in warfare. What is wrong in doing basic police work, gathering intelligence in communities and checkmating vandals before they act? Winning hearts and minds of the local populace anywhere may sound cliché, but it’s the way to go to secure information to prevent these actions. The work of intelligence is important to separate people from activities that shackle the economy, or destroy livelihoods.

Some allegedly patriotic Nigerians are applauding the recent air force raids on supposed militant hideouts in the southwest. So will “militants” be living in isolation? Anyone who assumes that there wouldn’t be collateral damage as a result of that action, in the last week of July 2016, has lost his humanity.

Poor local governance and distrust of the institutions of state makes intelligence gathering quite problematic, and to properly elaborate on the requirements for this paradigm shift requires a separate article.

Still, the perspective by Femi Falana, a leading Nigerian rights activist, helps to put this argument in context. I will quote him extensively:

After the crisis in the region and the emergence of the militants and the crisis that led to the amnesty programme, we would have expected the country to keep records. With amnesty, warlords had been asked to drop their guns and weapons to the society.But no one monitored them. At the time they were holding meetings to launch a more ferocious attack on the nation, no one was worried about them.The security operatives were concerned about other minor issues.It is pathetic that our security officials are more interested in reckless abuse of human rights rather than gathering information and intelligence that can fight and track crimes in the country.”

What we know is that the Nigerian government is encouraging terrible, criminal habits if it keeps rushing to the negotiating table anytime anyone takes up arms against the country.
This piece is an update of the one that appeared in the Vol 17, No 4, 2016 edition of the Africa Oil+Gas Report