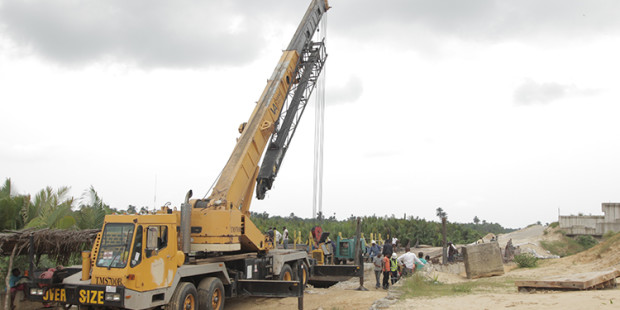 The rig Wellsmart 151 is moving to re-enter, test and complete Otakikpo 003 as Lekoil pushes ahead with the first phase of development for the Otakikpo field onshore Eastern Niger Delta.

To achieve its target of having  the first cargoes lifted by the third quarter of 2016, Lekoil has refinanced its existing $10Million Notes Issuance Agreement with FBN Capital Limited, the investment arm of First Bank, Nigeria’s biggest lender.

The AIM listed Lekoil has also secured a new 2Billion Naira, which it says “approximates$10Million at the Central Bank of Nigeria exchange rate of 199NGN:1USD at time of execution) facility from FBN”.

With  this announcement coming on the same day the CBN has floated the Naira, which plunged from the fixed 1; 199 to 1:280, Lekoil clarifies that the two billion naira is not going to be converted. “The money will be used for naira payments only”.

Oil industry payments in Nigeria are  made in both the local currency Naira and the US Dollars.

Details on the funding are as follows.

“The US$10Million facility has a maturity of three years and is repayable quarterly after a six-month moratorium with a margin of 11.25% over LIBOR. The existing NIA bridge facility, of which US$5 million was due May 2016, has been extended to August 2016 and subsequently refinanced into the new USD facility”.

The statement continues that: . The new2Billion Naira facility “has a maturity of three years, is repayable quarterly with ten quarterly instalments after a six-month moratorium. The notes have an interest rate, referencing the higher of the 30-day average of 90 day NIBOR + 6% or 20%”.

Although the statement clearly says : 2Billion Naira (US$10Million), Lekoil’s spokesperson Hamilton Esi explains that this particular loan will not be converted, it is going to be used for settling Naira denominated transactions.

Lekoil says that “following the successful drill stem tests at Otakikpo which produced oil flows in excess of company expectations(12,088BOPD on 36/64 inch choke, from two sands), the company reconfirms that it is on track to complete Otakikpo within the original US$82Million capital expenditure budget that was estimated in 2014.

“As an indigenous Nigerian E&P company, Lekoil is pleased to secure funding from one of the key local lenders, FBN. The Company has the flexibility to pay a portion of its costs in Naira, and expects to draw down on the Naira facility as needed. The facility has no pre-payment penalty”.