CGG has acquired and processed over 25,000 km2 of new 3D BroadSeis™ multi-client seismic data over available and licensed blocks in Gabon’s 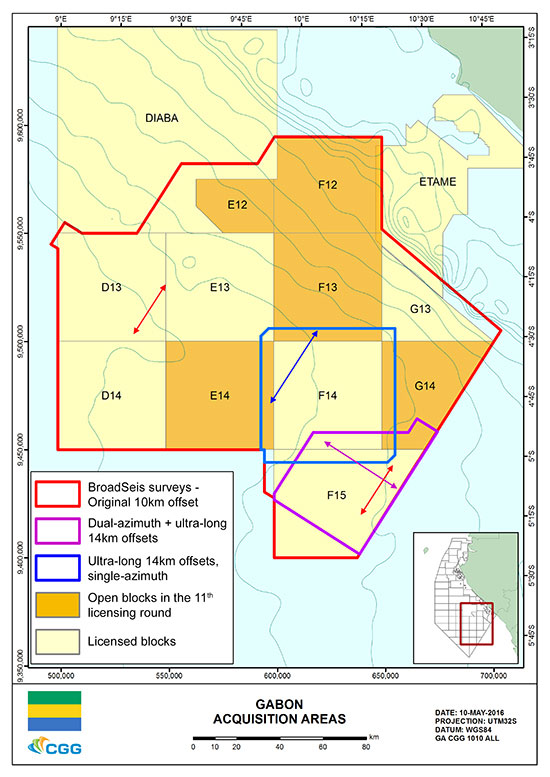 South Basin. It is to aid companies participating in the country’s on-going 11th deepwater licensing round.

“A fast-track pre-stack time-migrated dataset for this survey is available now, along with sample pre-stack depth reverse time-migrated (RTM) data in one area”, the company says. “The final RTM for the whole of the survey area will be available this summer”.

The world’s top geophysics company is excited that it was able to carry out a project of such a scale, in conjunction with the state hydrocarbon firm Direction-Generale des Hydrocarbures of Gabon (DGH)- at a time of  depressed oil prices.

The survey’s objective, CGG explains, “is to image potential prospective structures at base salt level without compromising the shallower post-salt image quality”.

Then the company boasts: “The data do not disappoint. Even a preliminary ultra-fast-track dataset produced onboard was described as “way beyond expectations” by a major oil company interpreter”.

On the full fast-track dataset, more detail below the salt is being revealed than has ever been seen before, revolutionizing the understanding of the geology of the area. Early seismic imaging results indicate the presence of thick syn-rift and sag sequences below the salt, which are the key intervals of a pre-salt petroleum system and indicate many exciting prospects, some of which continue beyond the borders of the survey so that their full extent cannot be gauged.

CGG claims that the Gabonese bid round“has generated considerable interest from both International Oil Companies (IOC’s) and newcomers alike, encouraged by the success of exploration in the conjugate margin offshore Brazil, as well as recent pre-salt discoveries such as Ruche, Tortue, Diaman and Leopard in nearby Gabonese waters. CGG has worked directly with the Direction Generale des Hydrocarbures of Gabon (DGH) to acquire and process to enable evaluation of this prospective area”.  The Gabonese government has not yet corroborated that claim.

The company says the survey is being processed using the latest high-end imaging technology to produce the clearest images. “The fast-track PSTM volume shows clear uplift over the existing data, while the fast-track PSDM shows the full benefits of advanced velocity modeling and depth-migrated modern broadband 3D seismic data. The uplift in subsalt imaging that will be achieved in the final dataset is dramatic; the RTM fully depth-migrated example shows clearly defined tilted fault blocks and horst features as well as the highly complex nature of the thrusted and distorted salt and sediment overburden.

“Multi-layer tomography (TomoML) and full waveform inversion (FWI) are being used to create the final velocity model, with RTM being used in the velocity model building iterations. The high-quality, low-frequency data acquired using the BroadSeis solution is particularly beneficial for FWI as the low frequencies prevent cycle-skipping. The imaging improvement from the FWI velocity model can be seen both in the shallower section, where pull-up/push-down image distortions are precisely corrected, and in the deeper salt bodies, where salt flanks and subsalt reflectors show improved focus and continuity due to better overburden description.

“Although this dataset delivers unprecedented images of the subsurface in this area, additional data are being acquired to improve the imaging still further in the most complex geology to the southeast of the survey. Tailored multi-vessel survey design is enabling longer offsets, up to 14 km in the same orientation as the original data, to be acquired over block F14. In block F15, adjacent to the Congo border, a second orthogonal azimuth of the full range of offsets, including those up to 14 km, is being acquired.

Longer offsets and dual azimuths are expected to improve the sub-salt illumination and provide even greater clarity of the most challenging structures. In order to acquire these long offsets an additional source vessel is being deployed. Synchronized source technology and blended acquisition are being used to enable the shot interval to be less than the record length, so that source density, and therefore fold of coverage, can be maintained”.