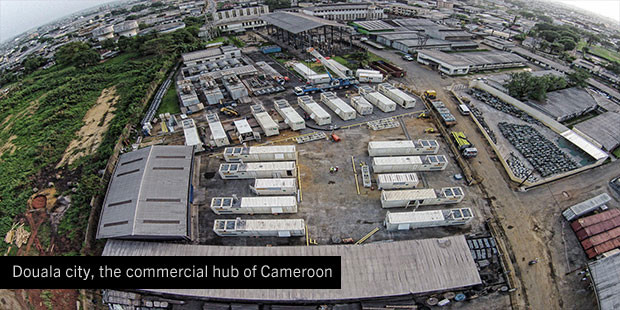 The Train Rig contracted to drill two wells into the onshore Cameroon’s Logbaba Field, has arrived the port of Douala, the country’s main port. Its arrival confirms that Gaz du Cameroun (GDC) is close to fulfilling its plans to commence drilling in early third quarter 2016 and complete drilling by the end of 2016.

The new rail-mounted drilling platform for both a twin and step-out well will be located at the existing Logbaba plant and well site, approximately 13km from the port. The equipment is being supplied and operated by Savannah Oil Services.

GDC, a wholly owned subsidiary of the AIM listed minnow Victoria Oil &Gas, will be drilling  the wells to supplement the two existing Logbaba production wells (La-105 and La-106).
The two new Logbaba wells (La-107 and La-108) are required to meet the growing market demand for Logbaba gas, to develop Logbaba reserves, and to move some of our 2P (Proven plus Probable) reserves into the 1P (Proven) reserve category.

One of the wells will twin the La-104 well drilled in 1957; the other will be a step-out well to be drilled into a target intended to prove up more Probable reserves. Both of the wells will be drilled directionally from a drilling pad adjacent to the Logbaba gas plant, and are to be tied into production facilities immediately after they are drilled and completed. The La-104 twin well is almost vertical, with a target depth of 3,200m; the step-out well will be drilled to intersect a target about 1,100m to the south-east of the Logbaba drilling pad, also with a target depth of 3,200m.

GDC has prepared rig pad foundations, including, leveling for the drill rig’s track and preparations of the cellars and mud pits together with the lay down areas for the equipment and drill piping.  Three drill conductors have been hammered into place and some extra mud pits and a further holding area are in the process of being finalised.

Other major site preparations, including new warehousing for rig supplies, camp civils and the pre-drilling slope stabilisation work are completed. Transportation and assembly of all component drill parts and camp are being provided for the project by Savannah.

« Nigeria: 11 More Rigs out of Work
Drilling Returns to South Lokichar in October 2016 »