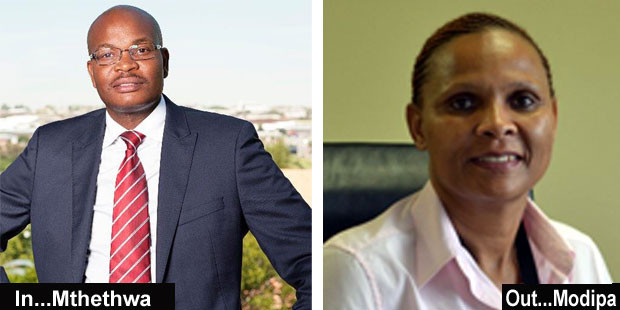 Seven months after the termination of the appointment of Nosizwe Nocwe-Macamo as PetroSA’s CEO, the state hydrocarbon company has bid her successor farewell.
Ms, Mapula Modipa, who acted for a year and a month (including the six month period during which Ms. Nocwe-Macamo was on suspension), joined PetroSA as Vice President of Human Capital on  October 1, 2014. She is succeeded as acting chief executive by Mr. Siphamandla Mthethwa.

Modipa’s last day with PetroSA is June 30, 2016. Although PetroSA’s story is that she is “departing due to personal reasons”, the leadership crisis in South Africa’s energy sector points otherwise. Ms. Modipa stepped into her position during a time of revolving doors in PetroSA. Nonhlanhla Jiyane, who was the company’s interim chairperson, resigned in late July 2015, after clashes with board members over a written response she delivered to the Central Energy Fund (CEF) — of which PetroSA is a subsidiary — raising concerns about its intervention in PetroSA’s turnaround strategy. This was after the board’s suspension of Nokwe-Macamo and Chief Financial Officer Lindiwe Mthimunye-Bakoro.
The PetroSA statement on Modipa’s resignation, says the company “has made great strides in addressing a disappointing performance in the 2014/15 financial year”. Despite severe challenges posed the low crude oil prices, a deteriorating  exchange rate and the lacklustre global economic growth, PetroSA is stabilising and continues to be a going concern.

Modipa’s successor  is the Group Chief Financial Officer of the Central Energy Fund (CEF). “During his tenure as Acting GCEO, Mr Mthethwa’s mandate is to ensure that PetroSA fortifies efforts towards the implementation of the Turnaround Plan.

“He joins PetroSA on July 1. He will remain in the position until the announcement of a permanent GCEO”.

« Isabel’s The New Sonangol Chief, But She Won’t Succeed Her Father
Baru’s Triumphant Return: Be Afraid! Be Very Afraid! »