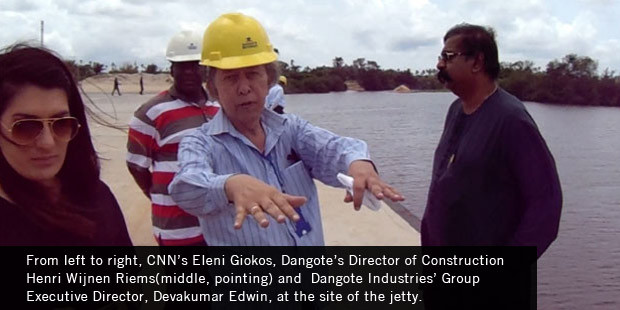 The company has spent over $500Million so far paying for land, earthworks and land reclamation, jetty construction, buying capital and earthmoving equipment and other logistics.

“The standard return for this kind of project is between 10 and 12% and we think we’d achieve that”, Edwin told Africa Oil+Gas Report, on the site of the facility, under construction in the Lekki Port in the east of Lagos. The project is on course for final inauguration in 2019.

Mr. Edwin would not be drawn into specifics of the total budget, but he nods with a smile when we ask if “the range is between nine and 11Billion US Dollars”.

The Dangote Refinery site occupies some 2,135 Hectares of land. “This is the largest single train refining plant in the world”, Mr. Edwin says.Work on the project commenced on February 11, 2014, according to Henri Wijnen Riems, who is director of construction, project scheduling and monitoring.