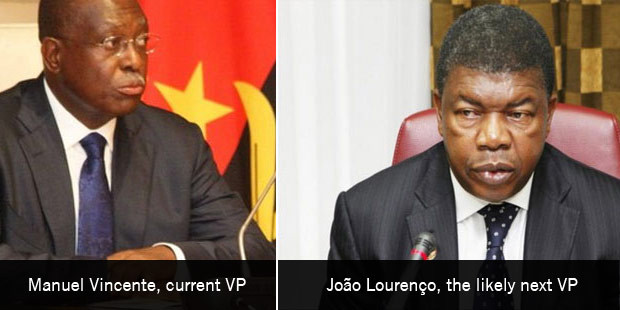 But he is looking less likely to take over the reins of Africa’s largest crude oil exporter after President José Eduardo dos Santos steps down in 2018.

João Lourenço the Minister of Defence, was elected to replace Roberto de Almeida, as the Vice President of the ruling party: Movement for the Popular Liberation of Angola (MPLA), during the 7th Ordinary Congress from August 17 to August 20, 2016. He is also favoured–ranking party sources tell us-to become the country’s Vice President, and the man likely to succeed the strongman dos Santos, who has ruled the country for 37 years, twenty of which he superintended the dizzying rise of Angola as the continent’s fastest growing Petro-state.

Ordinarily, the Vice President of the MPLA is not necessarily the Vice President of the country. The job is to run the party. Lourenço is part of a five man committee (Politburo) headed by President dos Santos, who will, among other things, compose the list of candidates to run for the 2017 general elections. However, several raking MPLA sources say that Lourenço’s election to the position of MPLA VP places him right on the path to the Presidency.

The Angolan economy has struggled since 2014, when crude oil prices crashed from an all time high of about $110 and graced sub $30 in early 2016. Mr dos Santos will lead the ruling party to elections in 2017 and then step aside a year later.

Africa Oil+Gas Report learned that  Manuel Vincente “will probably be sacrificed as the official scapegoat…why everything has gone wrong…and voila João Lourenço…will be the new country VP and the candidate to become the new president”.

Vincente was picked as a transition bridge in 2012 because dos Santos wanted to indicate that he was keen on handing over to someone, say people familiar with the political establishment process in Luanda. “He is really not a party man”, the sources say.

Africa Oil+Gas Report had argued that Manuel, who ran the state hydrocarbon company Sonangol for 13 years, had warmed his way into the party apparatus since he became Vice President in 2012 and was the anointed successor. With the feelers we get from Luanda after the MPLA Congress, it does look like our permutations have been torn apart.