Ladi Jadesimi, founder of the Lagos Deep Offshore Logistics (LADOL) base, has been elected Chairman of the 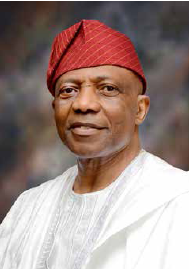 Mr. Jadesimi took over from Goodie Ibru, the Hotel magnate who had been Chairman since 2012 and who retired from the board after serving for 10 years.

A graduate of Oxford University (Jurisprudence, 1966) and Fellow of the Institute of Chartered Accountants, England and Wales, Mr. Jadesimi is former Partner of Arthur Anderson in Nigeria.

After over 15 years of practice as a Chartered Accountant, Jadesimi took early retirement from practice to engage in private business, primarily in banking, oil and gas and real estate.

In 2000, started planning, with others, a purpose-built, state-of-the-art logistics and engineering base west of the Niger Delta.

“LADOL was conceived and designed to be an efficient, custom-built, fully integrated, secure and independent engineering and logistics base operating 24/7 in the LADOL Free Zone for deep offshore oil and gas projects”, the company says in its website.

Apart from NDPR and LADOL, Jadesimi serves on the board of several companies, including First City Monument Bank (FCMB), as a Non-Executive Director.