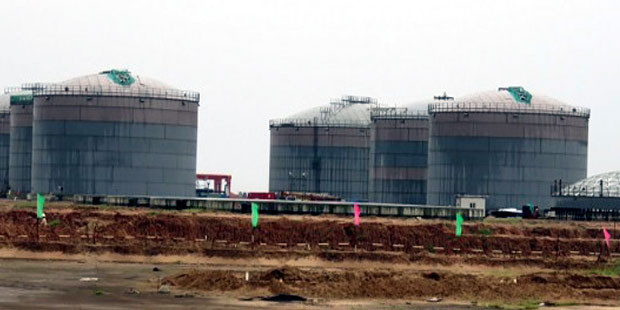 Angolan state hydrocarbon company Sonangol, has declared, as suspended, construction work on its 200,000Barrels Per Day Refinery in Lobito, in the country’s southwest.

The company also suspended the Oil Storage Terminal undergoing construction at Barra do Danda, near Luanda.

The announcement on Sonangol’s  website, confirms what Africa Oil+Gas Report published in its Refining Gap issue, ( Volume 17, No 5), released in late July 2016.

It looks like, for some time at least, Africa’s largest crude oil exporter will continue to import most of the refined products  it consumes.

The Angolans have been quit taciturn about releasing information about the status of the refinery construction.  Until this announcement, the best you could get from  the latest Angolan update of the United States’ Energy Information Administration. (EIA), wasthe official line: “Construction on a new Sonaref refinery in Lobito started in December 2012”.

And everywhere else in the public domain, “the refinery will have an initial processing capacity of 120,000BOPD and is scheduled to come online latest 2018.”

What should interest you is thesub sentence, “although the start date has been pushed back before”.

Africa Oil+Gas Report  had noted in the cited edition  that “no construction is going on at the plant, located in Lobito in  Benguela Province, on the Atlantic Coast north of Catumbela Estuary close to the country’s southwest.The promise by project promoters, that construction of the refinery would begin in earnest in 2015, after the initial groundbreaking in 2012, never came to pass.Sonangol did hire Standard Chartered Bank UK In December 2013, provide financial consulting , but the required funding did not come.

The Sonaref refinery first came to global attention at the World Petroleum Congress in Johannesburg, South Africa in September 2005, when Songol announced it had a list of willing partners queueing up to finance the project. In March 2006, the president of Sonangol and the vice president of Sinopec signed a partnership agreement to develop the refinery of which Sonangol would hold 70% of the stakes and Sinopec 30%. The (then) $3.5Billion project was planned to have the capacity to process 200,000 BPSD. Sinopec, the sole funder of the project, expected the refinery to start operations in 2010.

The Chinese pulled out early in the transaction, almost before the ink was dry on their agreement with Sonangol. In 2007, Sinopec withdrew from the project, citing concerns about the inclement climate for refined products. Coincidentally,Sinopec withdrew from its stakes in Angolan offshore oil blocks 15, 17 and 18, almost immediately after the end to negotiations on Sonaref.

The refinery is expected to run on Angola’s crude oil, with refined products sold to domestic and international markets. EIA explains that preliminary estimates show that Angola consumed roughly 130,000 BOPD of petroleum products in 2015, more than double the volume consumed ten years earlier. In September 2014, the government raised retail fuel prices by 25% for gasoline and diesel, by 21.6% for liquefied petroleum gas, by 34.6% for kerosene, by 100% for heavy fuels, and by 18.8% for asphalt.

« Dangote Refinery: Low Double Digit Return in Seven Years
Why Nigeria Should Have Open Bidding for the Refineries »