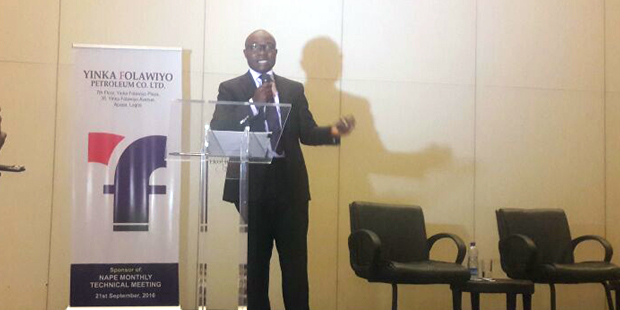 The decision to change the field development strategy from a full, integrated oil, gas condensate and LPG all at once, to a phased development beginning from crude oil production, accelerated the pace of the Aje Field to market.
The Final Investment Decision for the Field was taken at the onset of one of the biggest crude oil price crashes in history, although the asset’s equity partners were not fully cognisant of it as of then. “We took the decision when the price was at $74”, Bolaji Musah, acting Managing Director, Yinka Folawiyo Petroleum (YFP) Company Limited, told a gathering of petroleum geoscientists at a technical meeting recently.
Aje field is located in Oil Mining Lease (OML) 113, in the Benin Basin, offshore Lagos, Nigeria’s financial hub. It commenced commercial production in May 2016.

The industry became even more challenging in the course of the project construction. “We were drilling Aje-5 when crude prices touched $27”, Musah said.
The first cargo of Aje crude, some 218,000 barrels, were exported in mid -September 2016, when crude oil prices were slightly above $40.

“If we had kept to the integrated oil, gas condensate and LPG development at once, we wouldn’t have been here today”, he explained to the Nigerian Association of Petroleum Explorationists (NAPE).
Musah’s statement was a veiled reference to Chevron’s operatorship of the field. The US oil major took charge as technical advisor in 2006 and exited the asset in 2011. Its plan for integrated oil, gas condensate and LPG development was t have taken Aje to first gas in late 2017 and oi production much later.

Aje field reserves are relatively marginal (The FID was taken at 35Million Barrels of Oil P50), even more so for an offshore asset at a water depth in excess of 100metres. “It is a poor boy kind of development”, Musah declared.

Folawiyo Aje Services Ltd (FASL) is a wholly owned subsidiary of YFP and serves as the Technical Advisor for the JV. It is made up of consultants and staff from the JV partners, who include New Age Exploration Nigeria Limited, EER (Colobus) Nigeria Limited, Pan Petroleum (Panoro Energy) Aje Limited and PR Oil & Gas Nigeria Limited. The Aje field currently producers around 6,000BOPD and it is the first full scale commercial oil production in Nigeria, outside of the Niger Delta region.