About time: the most influential hydrocarbon journalist on the continent gets the Lifetime Achievement Award

The doyen of Africa’s oil journalists has won the Lifetime Achievement Award of the African Upstream landscape.

Barry Morgan, West African correspondent of the Norway based Upstream Newspaper, received the award at the Africa Oil Week in Cape Town, for “his significant personal effort. sustained commitment and exceptional dedication to building the Cape to Cairo oil and gas industry and continental economic future”.

It was about time. 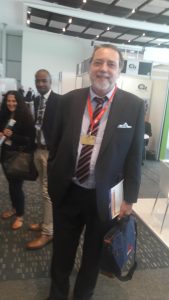 “Clad in Safari-style Khaki and casually understated, Barry has travelled widely, and met many of the players of the continent’s oil and gas game”, wrote Duncan Clarke in his seminal book, Africa: Crude Continent: The Struggle for Africa’s Oil Prize. “He has an observant eye and sound background in the complexities of Africa, retained in a mind always on the lookout for the many angles that make up the lattice of African hydrocarbons and its associated politics”.

Morgan studied law and received LLB in 1980 at the London University’s School of Oriental &African Studies (SOAS) and a Master’s degree in 1981 at Dundee University’s Centre for Petroleum &Mineral Law &Policy.

“That’s to say Master’s in Law and Law of the Sea”, he once told me, over drinks one evening in Abidjan, the capital of Cote d’Ivoire.

He never practised law. After school, he went and worked for Noroil  and Norconsultants (which became Euroil after a takeover), as a senior analyst. He left Euroil in 1987 for Reuters’ energy desk, where he spent only a year and left the agency, “for a combination of freelance and helping someone in Oxfordshire set up a drilling newsletter which I realised would bring neither of us any money so I went back on the market”.

He got two offers: one from OPEC and the other from Papua New Guinea’s Ministry of Energy, as petroleum policy officer, to help draft their petroleum code.

‘I chose OPEC”, he says with a laugh.

But something didn’t add up.

Reuters was supposed to be a bespoke company. So why did Morgan leap out of one of the world’s largest news agencies, into the dark? I asked.

“Reuters disappointed. They started closing bureaus and relying on stringers and it became clear it was a most impossible to get on the OPEC beat. I wanted overseas and they wanted desk bound markets reporters.

“Reuters had desk bound folk and field journalists. Actually, no one on the energy products desk was a journalist, rather they were bright young folks and secretary types who could stand having a broker in one ear and trader in the other and updating the digits on the screen every five minutes. They were all good and extremely talented people. But that kind of gig was not for me”

Morgan, 59, had always been the Field type. After 35 years post graduate experience he still can’t stand formal, gala dinners. And if he wasn’t a recipient of an award, I can bet he wouldn’t have sat through the PetroAfricanus dinner, at the luxurious Table Bay Hotel in Cape Town, in the course of the Africa Oil Week in November 2016, where he received the distinguished Lifetime Achievement Award.

His adventure story goes back forty something years.

Born in North London in 1957, the year that the Soviet Union launched Sputnik 1, the first artificial Earth satellite, into orbit and Ghana became Independent, he had, as a teenager, the map of the world on the wall in his room (picture that scene about the young medical doctor in his room in the early moments of the movie Last King of Scotland)

“I was intrigued by what I read”, he recalls. Interailing around Europe at 16 and 17 made me want to see more.”

At 16, he went on a cruise on the old Second World War troopship SS Uganda. From Ceuta calling in at Monrovia, Banjul, Dakar and Freetown along with post grad assistants specialising in African Studies and various disciplines giving lectures on board and talking about the continent off board. On that trip, the young Barry Morgan met African students every time he went to Port.

At 19, Morgan took to the road, travelling overland through the Asian minor, Afghanistan, Iran, the Indian subcontinent and returning via Ethiopia, Sudan, and Egypt, after which he went to study at SOAS.

He describes his work in OPEC in Vienna as “an eight year stint, in their news agency and PR department, writing the Secretary General’s speeches, etc , the first five years for the oil ministers and the last three years for the OPEC fund (i.e. finance ministers)”.

The so called stint has turned out to be the second longest period he had spent in any single institution. He was in Vienna when Erik Means- who worked with him at Euroil -and other Norwegian colleagues, decided to establish Upstream. He left Vienna for Accra in 1996, to set up the West Africa office of Upstream. He has been there 20 years. Upstream, through Morgan’s work, has helped explain Africa’s oil industry more thoroughly than most trade journals and newsletters from anywhere pretending to do the same.

An old CV of Morgan I dug up, obviously several decades old, has him quoted as saying he maintains “a professional interest in Law and Development Issues”, through active contact with the OPEC Fund, SOAS and the Petroleum Law Education Trust, the International Bar Association, the Royal Institute for International Affairs, the Vienna Institute for Development and the London Institute for African Alternatives”.

For someone with a healthy scepticism about how politicians and bureaucrats run global affairs and a perspective honed from years of engaging with the African continent, Morgan is not in a haste to pass a judgement on Africa’s future. Nor is he in hurry to write that book. “I am told I should, but I don’t think the world needs yet another naval searching of and on Africa by some hack”.