Ugandan Locals Get 36% of Oil and Gas Contracts 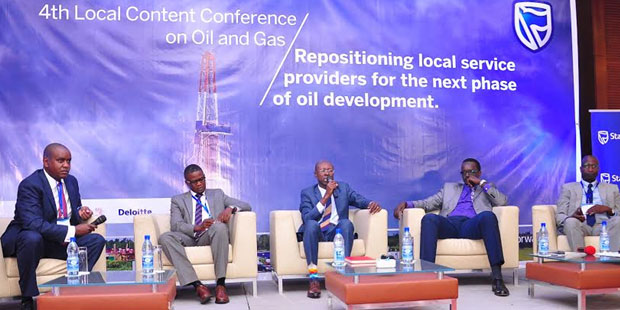 The percentage of upstream oil and gas contracts awarded to Ugandan companies has leaped from 17% in 2009 to 36% in 2016, according to the country’s ministry of energy and minerals. “Some progress is being made”, Ibrahim Kasita, the spokesperson for the Ministry, told an oil and gas Local Content Conference in Kampala.
Mr. Kasita said that more than 1,000 local enterprises have been able to provide services such as logistics, transport and medical services.

Oil was found in commercial quantities in Uganda in 2006.
But activities that should lead to delivery of crude oil into a local refinery as well as export tankers have dragged. It is expected, however, that final investment decision will be made on the development plan for the entire Albert basin by the 4th quarter of 2017. First oil, then, would be expected by early 2021, as a 1,444km pipeline will have to be constructed, 500 wells are estimated to be drilled in the next 3-5 years, two central processing facilities will be installed and maintained, in-field (feeder) pipelines will be constructed, there will be oilfield crude storage tanks/facilities, waste management and treatment and logistical services.

“The country is in transition from the exploration to commercial phase of oil and gas development”, said Edwin Mucai, head of corporate and business banking at Stanbic Bank Uganda, which led the sponsorship of the conference. “To be relevant and competitive in the next phase of Uganda’s upstream development, local companies must take a long term view towards investments and plan a lot more strategically,”

Things have happened faster in the area of government policy, legislation and fostering of an enabling environment in the last three years than they have been in the seven years before them. The Petroleum (Exploration, Development and Production) Act and Petroleum (Refining, Conversion, Transmission and
Midstream Storage) Act were passed in 2013. The Public Finance Management (Amendment) Act, which handles petroleum revenue management, was passed in 2015. Regulations on operations, Health, Safety and Environment (HSE), National Content, Metering and Midstream storage were all promulgated between 2015 and 2016.

After more than five years of hand wringing over issues such as recoverable reserves and production
allowable, the government finally issued production licenses for nine oil fields in the Albertine Graben, Uganda’s only prospective basin. The government has also set up and operationalised the Ugandan National Oil Company, the Petroleum Authority of Uganda and Directorate of Petroleum.

Kasita told the conference that National Local Content regulations are firmly in place in Uganda and embedded within the Oil and Gas Policy, in the Production Sharing Agreements. “They are also in the up-stream and mid-stream laws that require oil firms to employ Ugandans and have ring-fenced certain activities for local service companies,” he explained.
121 exploration and appraisal wells have been drilled in the Albertine Graben to date, including 39 exploration wells and 82 appraisal wells.106 wells encountered Hydrocarbons.

« Ghanaian Companies Grab $1Billion Worth of Contracts
Uganda: ‘Come Let’s Cash Out Together’ »