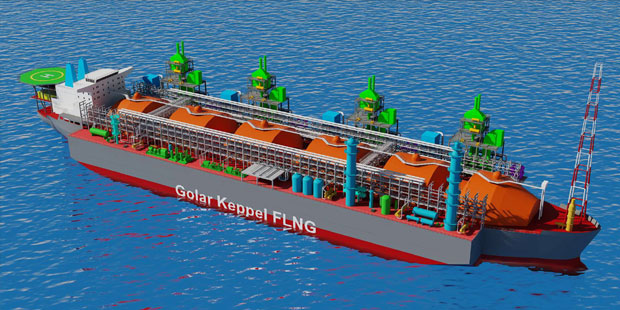 By Sully Manope, in Douala

Golar’s FLNG Hilli, currently under conversion in Singapore’s Keppel Shipyard, is close to moving to West Africa to start its eight-year contract in the second half of 2017.

Golar, owner and operator of liquefied natural gas carriers; Perenco, the French E&P independent and Cameroon’s state hydrocarbon company Société Nationale des Hydrocarbures (SNH), are partners in the 1.2Million Tonnes Per Annum (MMTPA) FLNG Hilli, which they have been developing since November 2014.

Shell’s bigger Prelude FLNG project, planned for offshore Western Australia, took Final Investment Decision (FID) in 2011, four years earlier than the September 2015 FID for FLNG Hilli. But Prelude FLNG is a 5.3MMTPA project with all the issues of a large LNG facility. With 488m in length and 74m in width, it is the largest facility of its kind. It will monetize the resources in the 3Tcf Prelude natural gas field, discovered in 2007. Partners in the project include Shell, 67.5%, INPEX, 17.5%; KOGAS, 10% and CPC, 5%.

Golar has spoken with certainty about the scheduled delivery of the conversion project and claims it is within its $1.2Billion budget. Shell speaks less of timing of delivery and more of the might of the Prelude: ”Hundreds of engineers from across the world have combined their experience and expertise to design the world’s largest floating offshore facility”, the company says on its website. “It will be used to help open up new natural gas fields at sea that are currently considered too costly or difficult to develop”. Prelude FLNG is said to be the largest of its kind, but the world, really, does not yet know of any stationary gas floater! Module installation work for the Prelude FLNG has been completed at Samsung Heavy Industries’ Geoje shipyard in South Korea and, in the words of the JGC, which is contracted to support the completions work for the FLNG’s safe and on-schedule completion, ”commissioning is well and truly underway.” Still, it is likely that this project is not commissioned until the third quarter of 2017.

The Cameroon project is based on the allocation of 500 Bcf of natural gas reserves from offshore Kribi fields, which will be exported to global markets via the FLNG Hilli. The 1.2MMTPA of LNG, represents approximately 50% of the vessel’s nameplate production capacity.